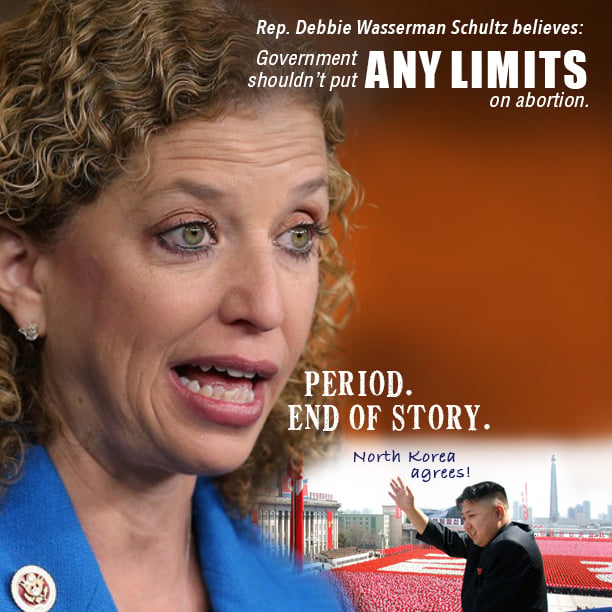 Congresswoman Aligns Herself With North Korea on Abortion

President Clinton famously advocated that abortion should be "safe, legal, and rare."  This week, the rare part was thrown out the window by U.S. Representative Debbie Wasserman Schultz. In doing so, she has aligned herself with North Korea on the abortion issue.

Tweet: Why is @DWStweets aligning herself with North Korea on abortion? #prolife  http://bit.ly/1GTKk77

The New York State Assembly is leading the race to liberalize abortion laws.  Previously they had only allowed abortion in the third trimester if the "health of the mother" was at stake.  Now they passed a law establishing a "right" to abortion in the third trimester.  Unquestioned access to abortion until the moment before delivery is as radical and out of touch with both the national and international view on abortion as possible.

However, unquestioned access to abortion until the moment before birth is becoming more common in the Democrat Party.  When asked about abortion as he kicked off his presidential campaign, Rand Paul responded, "Why don’t we ask the DNC: Is it OK to kill a 7-pound baby in the uterus? You go back and go ask Debbie Wasserman Schultz if she’s OK with killing a 7-pound baby that’s just not born yet. Ask her when life begins, and ask Debbie when she’s willing to protect life. When you get an answer from Debbie, come back to me.”  Debbie Wasserman Schultz is the chairman of the Democrat National Committee.

Schultz' response, "I support letting women and their doctors make this decision without government getting involved. Period. End of story."

There is not a single restriction on abortion she agrees with.

This is a direct repudiation of the oft-repeated desire among abortion advocates for abortion to be "safe, legal, and rare."  However, Schultz' perspective is strikingly out of line with the views of the American public and with international views on abortion.

In a recent Gallup poll, only 25% of respondents said abortion should be legal in all circumstances.  In other words, 3 in 4 Americans feel there should be some restrictions on abortion.

Tweet: .@DWStweets stands with North Korea and 25% of Americans in opposing all restrictions on abortion #prolife http://bit.ly/1GTKk77

Internationally, bans on abortion after 12 weeks are common practice.  Canada, China, North Korea, and Vietnam are the only countries where there are no legal bans on abortion. Do Schultz and her allies want to reject the views of Americans and the international community and align themselves with China and North Korea on abortion? That appears to be where things are headed.