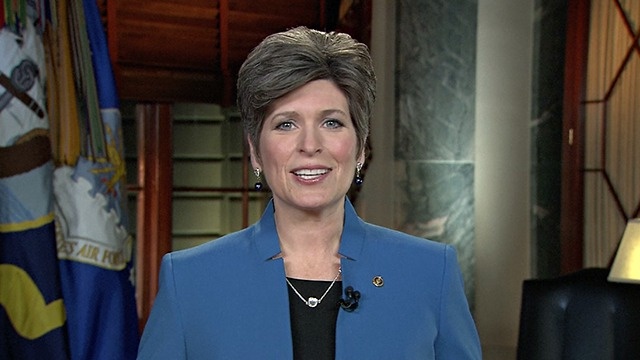 Last night Joni Ernst, a pro-life freshman Senator and first female elected to Congress from Iowa, gave the Republican response to the State of the Union Address.  Joni Ernst is a Lieutenant Colonel in the Iowa National Guard, and previously served in the state senate.  Her address was a down to earth speech about the challenges facing every day Americans.

In the speech she laid out the Republican agenda for this new Congress, and she passionately declared "We'll defend life, because protecting our most vulnerable is an important measure of any society."  Coming two days before the March for Life and the anniversary of Roe v. Wade, this was a strong reminder of why we support life.

It also stood in stark contrast to the president's speech.  He forcefully declared, "I want our actions to tell every child, in every neighborhood: your life matters," while strongly defending the right to abortion.  Later he spoke of the importance of respecting human dignity in the context of how we treat terrorists, Jews, muslims, political prisoners, women, religious minorities, and the LGBT community but noticeably ignored those who most need their dignity respected: the unborn.

Tomorrow, while thousands march to stand for life on the anniversary of Roe v. Wade, Congress will be voting on the Pain Capable Unborn Child Protection Act, and it will be a powerful moment to defend life and respect human dignity.

You can view the entirety of Sen. Ernst's speech below.