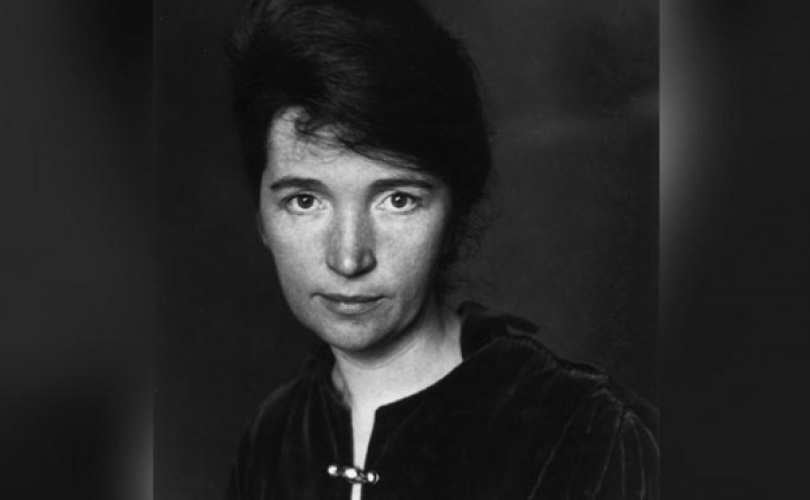 This is the sixth post in a six-post discussion of Margaret Sanger. In each post, we will be examining common statements made in defense of her legacy and determine if these correspond with her writings. Read the previous post here.

Although many historians agree that Margaret Sanger promoted eugenics, some disagree as to the extent to which she promoted it. Some historians, such as Ellen Chelser, author of Woman of Valor, would argue that Sanger simply flirted with eugenics because it was popular at the time. In so doing, Sanger wished to increase the popularity of her own movement. Chesler wrote, “Sanger had little choice but to engage with eugenic discourse in the 1920s, since...eugenics then enjoyed a degree of respectability that birth control did not.”[1] However, Chesler failed to follow this statement with proof that this was the case. Chesler’s stance is the same as Planned Parenthood’s: “Margaret...also aligned herself with Eugenicists. Ugh. It doesn’t seem to make sense. But way back in the early 20th century, eugenics was an immensely popular social movement, one with the kind of widespread legitimacy Margaret craved for her own birth control campaign,” The History of 100 Years of Women’s Health Care At Planned Parenthood.

Like Chesler, Vanessa Murphree, author of “Mission Accomplished,” believed that Margaret Sanger adopted a eugenic stance because it was popular and socially accepted at the time.[2] Other historians, such as George Grant, author of Killer Angel, believe that Margaret Sanger wholeheartedly embraced the eugenics movement because she firmly believed in eugenic principles. “She was a true believer [in eugenics]—not simply someone who assimilated the jargon of the times, as Planned Parenthood officials would have us believe,” wrote Grant.[3]

Margaret Sanger was so involved in the eugenic movement that she advanced their cause, even when doing so did not advance her own. According to Kennedy, “She solicited their scholarly papers for her conferences; she asked them to testify in Congressional hearings.”[4] She not only supported eugenicists and what they stood for, she gathered them together to talk about eugenics and eugenic methods. Margaret Sanger was the “main organizer” of the First World Population Conference in Geneva.[5] Though she kept a low profile in her involvement in this event, she was largely responsible for this “scientific population conference,” as she called it.[6] By gathering together fellow eugenicists to talk about eugenics and to advance the cause, she was admitting how personally wrapped up she was in the movement.

As a eugenicist, Margaret Sanger had many eugenicist friends whom she influenced and by whom she was influenced. History books on Margaret Sanger often include a list of Sanger’s eugenicist friends for reference. Sanger associated with “Eugene Debs, Theodore Schroeder, Alexander Berkman, John Reed, Emma Goldman, and Henrietta Rodman.”[7] Grant wrote that “Virtually all of her Socialist friends, lovers, and comrades were committed eugenicists𑁋from the followers of Lenin in Revolutionary Socialism, like H.G. Wells, George Bernard Shaw, and Julius Hammer, to the followers of Hitler in National Socialism, like Ernest Rudin, Leon Whitney, and Harry Laughlin.”[8] Her professional associations mirrored her private and social ones: “Virtually all of [the American Birth Control League’s] board members were eugenicists.”[9] She asked Henry Fairchild, the head of the American Eugenics Society, to be on her clinic’s advisory board.[10] She sought eugenicists out, she was not simply influenced by them.

Margaret Sanger’s most notable eugenicist friend was, perhaps, Havelock Ellis. Ellis was “an important mentor of Sanger’s.”[11] As her friend and lover, Ellis taught Sanger about eugenics and the goals eugenicists strove for.[12] He wrote the preface to her book, Woman and the New Race.[13] “Her mentor and lover, Havelock Ellis, was the beloved disciple of Francis Galton...who first systemized and popularized eugenic thought.”[14] Sanger referenced Galton himself in “The Pivot of Civilization,” and included his more biased definition of eugenics—“the rational breeding of human beings”—alongside her own.

It is true that Margaret Sanger advocated eugenics in part to get more followers.[15] However, although Sanger wished to broaden her support base by incorporating eugenicist propaganda into her own, the way in which she advocated eugenics alienated some eugenicists, demonstrating that broadening her support base was not her sole purpose in adopting a eugenic worldview.

Instead of promoting childbearing in the upper classes, as some eugenicists did, Sanger wished to limit the number of children in the lower classes.[16] “[A]s long as civilized communities encourage unrestrained fecundity in the ‘normal’ members of the population...and penalize every attempt to introduce the principle of discrimination and responsibility in parenthood, they will be faced with the ever-increasing problem of feeble-mindedness,” Sanger wrote.[17] In her time, she believed that “the most urgent problem today is how to limit and discourage the over-fertility of the mentally and physically defective.”[18] This tendency to promote birth control and sterilization while downplaying and even criticizing the cradle competition pushed potential followers away.

Sanger further alienated fellow eugenicists by criticizing them, thus demonstrating that her adoption of eugenics was not a clever plan to get more followers, but the development of her own personal worldview. She did not hesitate to criticize those eugenicists who promoted the cradle competition and failed to acknowledge birth control and sterilization. “[T]hey are ignoring the exigent problem of the elimination of the feeble-minded,” Sanger wrote.[19] Had she adopted eugenics simply to get more followers, she would not have adopted a position that was controversial, but would instead have adopted the most inclusive version of that worldview. Therefore, the eugenics Sanger advocated for was an integral part of her own worldview, and not simply a plan to get more followers or an unconscious adoption of the latest fad.

Sanger was aware that some critics criticized her disregard for the value of a human life. But instead of asserting that she did value human life, Sanger answered those criticisms with a logical fallacy by criticizing her critics. She did not respond on the basis of their argument itself. She wrote that her critics valued human life when it came to eugenics, but disregarded it in the instance of war.[20] By attacking her accusers instead of answering their concerns about eugenics, Sanger was "poisoning the well." Her argument was a logical fallacy, and was consequently ineffective.