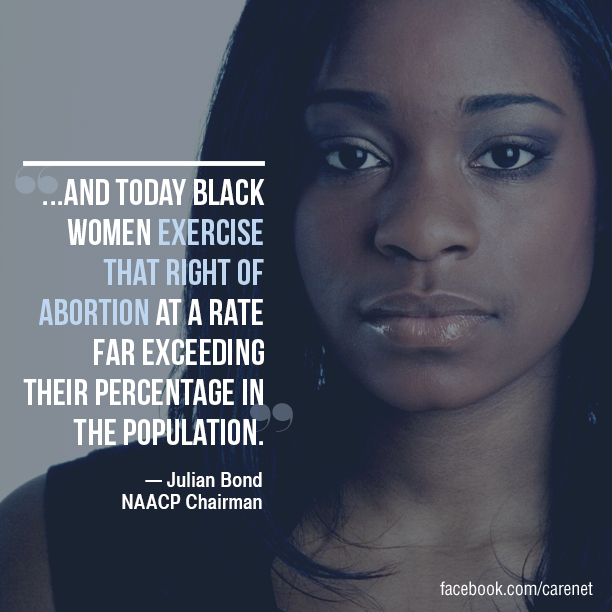 As we look forward to the March for Life tomorrow, pro-life activists are taking to twitter to share with the world #WhyWeMarch.  Sadly, one of the biggest reasons to march is the devastation abortion is wreaking on the African American community.  While pro-lifers have been pointing out this problem for years, it is something Julian Bond, the immediate past chairman of the NAACP, repeatedly bragged about as a success.

Julian Bond was the NAACP Chairman from 1998-2010 and on multiple occasions boasted of the high black abortion rate.  He proudly declared that "black women exercise that precious right at a rate far exceeding their percentage in the population."  He also declared "the right to abortion is as basic as the right to sit at a lunch counter."

The tragic truth is that he is right.  In 2010, 35.7% of abortions were by self-identified black women (1.) while non-hispanic blacks made up 12.7% of the female population (2.).  Black women truly do exercise the right to abortion at a rate far exceeding the population, and this has led to devastating consequences.  In New York City, more black babies are aborted than born, and the African American abortion rate is incredibly high in most major cities.

One analysis of CDC data, estimates that 13 million African Americans have died from abortion since 1973, while the next leading cause of death is heart disease at 2.2 million.  This is not something to celebrate, but something to grieve.  It does nothing to empower and advance colored people, and it is one of the reasons #WhyWeMarch.

The video of Julian Bond's statements were compiled by The Radiance Foundation and can be viewed below.