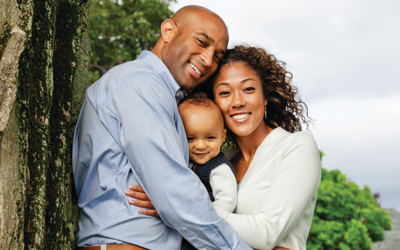 Nick* said that he needed information on abortion. The PDL coach asked some gently probing questions and discovered the passionate heart of a father.

86% of the callers who reached out to our Pregnancy Decision Line (PDL) in the last year were women. It’s not often a PDL coach picks up the phone and hears a male voice.

Like many men who call, Nick* said that he needed information on abortion for his girlfriend. However, when he added “because my girlfriend wants an abortion,” the PDL coach immediately sensed he and his girlfriend were not on the same page.

After providing some initial information about abortion, the PDL coach asked some gently probing questions. What she heard was the passionate heart of a father.

Nick shared that he believed in God and opposed abortion, but his girlfriend had her mind set. “I want to keep the baby,” he shared. “Babies are a gift from God.” He also confided that he didn’t think people should make big decisions like this all on their own. Before getting off the phone, he told our PDL coach, “I’m going to encourage her to call you or someone else.”

Men reach out to PDL for a variety of reasons. They often feel caught between their personal convictions and a culture that says they have no say as to whether their baby lives or dies. When they call PDL, they find a voice of compassion who affirms their worth as a father, and encourages them to share their thoughts and feelings.

Through your support of Care Net, you provide a safe place for women and men to go that challenges the lies of the pro-abortion culture and offers life- affirming support and encouragement to parents considering abortion.

When the PDL coach followed up, she Learned that Nick had convinced his girlfriend to see a counselor and they—together— decided to keep their baby. The coach rejoiced with Nick and provided information about his local pregnancy center to get additional support.

According to Care Net research, 4 in 10 women indicate the father of the baby was most influential voice in their abortion decision. And Nick’s story certainly underscores the critical role fathers play in preventing abortions.

But, Nick’s story also highlights a different problem—he wasn’t married to the mother of his child.

One of the main reasons many women seek abortions is a lack of support. When women are married—not just dating—they feel more secure and supported by their husband, and only 15% women who get abortions are married. This is why we, as Pro Abundant Life people, celebrate and encourage marriage, whenever possible, as the ideal environment to raise thriving children.

Your support makes these life-changing, life-SAVING conversations possible, and right now you can help save TWICE AS MANY LIVES through our $250,000 Matching Challenge with your generous year-end gift by December 31st.

Thank you for standing with us for LIFE!