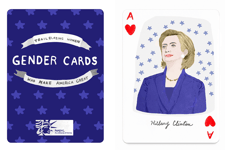 Recently, NARAL announced the release of their latest fundraiser: Gender Cards. Each card in the deck references feminist “Sheroes” who helped make America great. But NARAL has one problem: a number of their female heroes were pro-life. In fact, some of the most historically significant feminists lauded by NARAL’s Gender Cards were passionate defenders of the unborn. Oops…

In addition to Hillary Clinton, Margaret Sanger, and Tina Fey, NARAL highlights the work of Jane Addams, Elizabeth Cady Stanton, Lucretia Mott, Sacagawea, and Susan B. Anthony. Now it is no surprise that Clinton and Sanger are on the list. Sanger founded Planned Parenthood, argued for the eradication of undesirables from the gene pool through eugenics, and lobbied for abortion, while Clinton has been an outspoken pro-choice politician for years. However, the addition of Addams, Stanton, Mott, Sacagawea, and Anthony is quite surprising.

While all of these women, with the exception of Sacagawea, spent their lives creating and sustaining the feminist movement, none of them equated feminism with abortion. In fact, each one argued that abortion was one of the barriers to lasting freedom for women.

Jane Addams started Hull House, an outreach in Chicago for those caught in desperate poverty. More than two thousand people a day found comfort, shelter, food, and education within the settlement’s thirteen buildings.

Addams offered the mostly immigrant worker community, “daycare facilities, elder care, art and music classes, an art gallery, a public kitchen, a gymnasium, citizenship preparation classes, public baths and swimming pool, a men’s club, a labor museum, a cooperative residence for working women, a drama group and the first Little Theater in America, a meeting place for trade union groups, a circulating library, and an employment bureau.” In addition to her work with the poor, she fought for a woman’s right to vote and live her life with dignity. She became the first Vice President of the National American Woman Suffrage Association.

Addams encouraged and enabled young women to keep their babies. She did not believe that a woman had to choose between her child and a successful future. Her work is emulated by the pregnancy centers nationwide that offer their clients education, parenting resources, housing, job training, and other important resources to fulfill their dreams.

Elizabeth Cady Stanton and Lucretia Mott organized the first women’s rights convention in Seneca Falls, NY. Stanton wrote the famous Declaration of Sentiments calling for society to recognize and protect a woman’s right to vote, own property, attend college, exercise individual religious expression, etc. Stanton’s powerful call for feminism remains one of the most influential documents in the history of the movement. What NARAL somehow missed is that Stanton and her contemporaries were pro-life.

Stanton referred to abortion as infanticide. She also wrote against the “murder of children, either before or after birth” and said that, “when we consider that women are treated as property, it is degrading to women that we should treat our children as property to be disposed of as we wish.”

It is terribly ironic that NARAL chose Susan B. Anthony for their list. Her pro-life views are hardly a secret (the Susan B. Anthony List is a prominent pro-life advocacy organization). During the birth of feminism, Anthony and Stanton ran the feminist newspaper The Revolution. In it, they referred to abortion as “ante-natal murder” and refused advertising space to contraceptives and abortive drugs. They wrote, "Restellism [a period term for abortion] has long found in these broths of Beelzebub, its securest hiding place" and "Quack Medicine venders, however rich, proud, and pretentious, Foeticides and Infanticides, should be classed together and regarded with shuddering horror by the whole human race."

For Anthony, the greatest culprit in the death of the unborn was not women, but those who pressured women into sacrificing their children. She wrote, “No matter what the motive, love of ease, or a desire to save from suffering the unborn innocent, the woman is awfully guilty who commits the deed. It will burden her conscience in life, it will burden her soul in death; but oh! thrice guilty is he who, for selfish gratification, heedless of her prayers, indifferent to her fate, drove her to the desperation which impels her to the crime.”

These great feminists understood that it is not liberating to tell a woman she must choose between her child and success. They yearned for a society that affirmed the rights of all men and women to enjoy life, liberty, and property, whether or not in the womb. Feminists like Addams poured their lives into equipping women with the resources they needed to have an abundant life with their children.

In a previous post, I wrote about the liberal opposition to legislation designed to protect unborn baby girls from gender-motivated abortion. Worldwide, hundreds of thousands are snuffed out simply because they are of the wrong gender. No doubt, these great feminist “sheroes” would have opposed such barbarism and called it sexist and patriarchal.

NARAL does the opposite. It argues that children stand between a woman and her success, and that abortion is empowerment, not the “degradation” that Anthony recognized it to be. The irony is that they do so while championing the cause of “feminism” and saying they stand on the shoulders of women like Sacagawea, who did not attempt to abort her child, but instead carried it to term while traversing the wilderness with Lewis and Clarke.

Rather than equipping women to keep their children and achieve their dreams, NARAL views children as a roadblock on the path of personal success and motherhood as an unfortunate affliction.

Those who created the deck of Gender Cards would do well to study the roots of feminism. If they did, they would discover that it was not until the Sexual Revolution that feminism was linked with abortion. They would learn that their “sheroes” were heroes for the unborn. They would encounter women like Alice Paul. It was Paul who first campaigned for the Equal Rights Amendment and co-founded the National Women’s Party. She was also the one who called abortion “the ultimate exploitation of women.” No doubt, women like Tina Fey would remain on NARAL’s list, but let’s be honest, who has had a greater impact on feminism, Fey or Alice Paul?

Sorry NARAL, but when it comes to the history of feminism, it is we in the pro-life movement who have the winning hand.