When I found out I was pregnant, I panicked. At the time, I was using drugs and I feared that the baby would be born with deformities or severe complications. I thought that having an abortion was my only choice. I talked with some of my co-workers, Christian ladies, who encouraged and comforted me and told me to really think about the life inside of me. I also told my boyfriend, Nick. He begged me to keep the baby, but still believing I had no other options, I scheduled an appointment anyway, and the next morning I went to an abortion clinic.

The doctor determined that I was seventeen weeks along, so I would have to undergo a two-day procedure. They inserted a material called laminaria to dilate my cervix and induce labor. I was to return the following day to have the "contents of my uterus" removed. But when they did an ultrasound to ensure that the laminaria was in place, I saw my baby! My heart melted and I knew that this was not what I wanted to do. I asked the doctor to remove the laminaria, but he refused and told me that I would "be just fine."

So, I went to the emergency room and some of the ladies from my office met me there. The doctors in the ER said they could not help me. They were kind, but told me that they could not interfere with a medical procedure that another doctor had started. One of the doctors agreed to call my doctor to ask his permission to remove the laminaria, but he refused again. The ER doctors encouraged me to return to his office and try to convince him to help me.

It was getting late and I began to think that the situation was hopeless. But then, one of the ladies from my office suggested that we go to Choose Life, a Care Net center in Huntsville. My boyfriend met us there. The center was about to close, but they invited us in to hear our story. After I explained my situation, they staff began calling local doctors. One doctor who had just started volunteering at the center said that if I could come to his office immediately, he would try to save my baby.

The doctor successfully removed the laminaria and we were able to hear our baby’s heartbeat. At that moment, I knew everything was going to be okay. 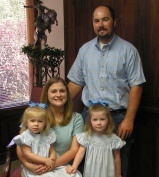 Since that day, our lives have never been the same. I received Christ as my Savior within the next few weeks and was baptized on Easter Sunday. Nick and I decided to get married, and two days before our wedding, Nick accepted Christ as his Savior! I gave birth to a healthy baby girl, Alora, and two years later Nick and I became parents to another beautiful daughter.

We are so thankful for the wonderful people at Choose Life. And to anyone who is considering an abortion, I would say that it is normal to be afraid. It is normal to feel like you cannot handle the situation, but you don’t have to because God will carry it if you let Him. There is help if you will just seek it out. I could not imagine life without my daughter!

Your prayers and support are critical to reaching mothers and fathers with hope and encouragement to CHOOSE LIFE! Won't you help support this vital work?