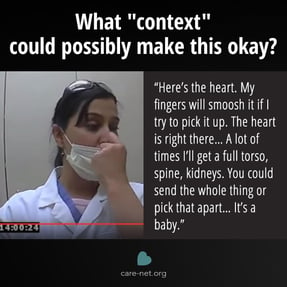 Now that Planned Parenthood's practices are out there for the whole world to see, defending them has become an Olympic sport. It takes Olympian-level skill to defend practices that are clearly gruesome, probably unethical, and possibly illegal.

What additional context could possibly make these statements ok?

PP Farrell: Mhm, mhm. Yeah. And so if we alter our process—
Buyer: Mhm.
PP Farrell: And we are able to obtain intact fetal cadavers, then we can make it part of the budget that any dissections are this, and splitting the specimens into different shipments is this, that’s, it’s all just a matter of line items.

Or this incredibly gory quote?

PP Ginde: "Here’s the heart. My fingers will smoosh it if I try to pick it up. The heart is right there… A lot of times I’ll get a full torso, spine, kidneys. You could send the whole thing or pick that apart… It’s a baby!"

To further highlight the hypocrisy of the "context arguers," did these same people come to the defense of former Los Angeles Clippers owner, Donald Sterling, when he was secretly recorded making racist comments? The situation was the same. Someone, with the intent of exposing his wrongdoing, secretly recorded him and goaded him into exposing his true thoughts and feelings.

When the shocking, ugly audio recording was released, did anyone rational come to his defense by claiming that his comments were "taken out of context"? No, because there was no context that could have made this statement any better: "It bothers me a lot that you want to broadcast that you’re associating with black people. Do you have to?" Or, "And I'm just saying that it's too bad you can't admire him privately. And during your ENTIRE ******* LIFE, your whole life, admire him -- bring him here, feed him, ***** him, I don't care. You can do anything. But don't put him on an Instagram for the world to see so they have to call me. And don't bring him to my games. OK?"

Again, was there some additional "context" that would have changed the fact that Mr. Sterling is a racist? No, and the NBA forced him out as a result of his comments.

Likewise, is there any context that will change the fact that Planned Parenthood has zero regard for the dignity of human life and engineers abortions so they can maximize their revenue from the parts they sell?

The answer is an Olympic-swimming-pool-sized "No."