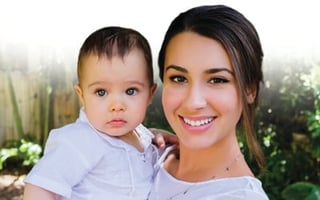 What to do when you're broke and pregnant?

Natasha* was having serious financial problems.

Every time she remembered staring at the positive pregnancy test, she felt her heart drop.

She wished she could turn to her boyfriend, but their relationship was rocky. It didn’t matter that she was carrying his child; she was deeply concerned about bringing a baby into those circumstances.

There seemed to be only one option: Abortion.

Most women follow through on their plan to abort their child only nine days after confirming their pregnancy, and now Natasha was well on her way to doing the same. She reached out to a local clinic and scheduled her abortion. It would all be over soon.

But the morning of her procedure, Natasha was anything but calm. Questions bounced around her mind. “What will it feel like?” “Am I making the right choice?”

She went over the material the clinic gave her. The procedure was so expensive, and Natasha had no idea how she was going to afford the abortion. She just knew she needed one.

Where could she get the money she needed? Desperate, she went to her computer and began searching online for a place that could help her.

And instead of a place to get financial assistance for her abortion, Natasha found the number for Care Net’s Pregnancy Decision Line (PDL).

Because of the online advertising for PDL—the nation’s only real-time pregnancy decision coaching hotline—we receive countless calls and emails from women and men who are not just considering abortion. . . they are actively seeking out information on what it involves and where to get one. These are EXACTLY the people we want to reach with truthful information and present with realistic alternatives to abortion.

Your support of PDL and the work of our network of over 1,100 affiliated pregnancy centers makes these moments—the last minute interventions and life-saving conversations—possible. And as we enter the last months of the year, your support is needed!

Your Support of Pregnancy Decision Line Saved Another Life!

When the PDL coach picked up the phone, Natasha quickly decided that the coach was different than anyone else she’d talked to.

Rather than telling her that her situation was hopeless and that abortion was the best choice for her, the coach talked with Natasha about the reality of her situation and her unborn baby.

A few days later, the coach called Natasha back to follow up. Natasha missed her appointment at the abortion clinic and never went back. But even though this mother was choosing LIFE for her unborn baby. . . She was still on her own, and still in need of help.

That’s when the PDL coach referred Natasha to a pregnancy center in her area, where people in her community were standing by, waiting to support her pregnancy, offer material assistance, and help her welcome her beautiful baby into the world.

For the first time since she looked at that pregnancy test, Natasha was no longer afraid. Instead, she was excited about the baby that was developing inside of her. Her baby.

Because of her conversation with the PDL Coach, she chose life. Because of her local Care Net Pregnancy Center, Natasha had the means to pursue abundant life for her new family.

Thanks to your generous support, Natasha’s heart was forever changed and her baby’s heart is still beating.

Every day, women like Natasha face tough relationships and financial situations that drive them to abortion. All too often, there isn’t a voice around them to speak a message of hope and life. Nowadays, abortion has become the default response to adversity. But we can change that, one call or email or visit at a time. One life at a time.

* Names changed to protect the identity of our clients.