Why Planned Parenthood Has to Lie About Us

Nazi propaganda minister Joseph Goebbels once said, “If you tell a lie big enough and keep repeating it, people will eventually come to believe it.”

This appears to be the strategy that Planned Parenthood and its allies are using to attack pregnancy centers and the life-saving work they do in their communities.

Care Net has heard pro-choice activists tell the same lies about pregnancy centers for several years. We responded to many of the most common attacks in this article in the Huffington Post back in 2014. In 2016, we published a report called, “The Truth About Crisis Pregnancy Centers” to give more lengthy refutations to the misleading and downright false accusations that abortion advocates make about pregnancy centers.

This new misinformation campaign is filled with some real doozies and, of course, not a single piece of information in it is sourced. Here are some “lowlights.”

The flyer claims that pregnancy centers “collect the same detailed personal medical information as a clinic but are not required to keep it private, like a doctor’s office is. They reserve the right to reveal or sell personal info for ‘morally compelling’ reasons.” In fact, most medical pregnancy centers do not charge for services nor transmit protected health information for billing purposes, and thus do not fall under the HIPAA standard.  Planned Parenthood knows this, but chooses to lie about it. Moreover, because of Care Net’s commitment to deliver the highest standard of care to our patients, Care Net-affiliated medical pregnancy centers adhere to patient confidentiality practices modeled after the HIPAA regulations. Adoption of Care Net guidelines on patient confidentiality is mandatory for Care Net affiliates and adherence to them is enforced. Care Net will disaffiliate any center that persists in violating our standards of affiliation. It is evidence of our commitment to functioning according to ethical principles.

Finally, the release of medical records policy is in accordance with all applicable state and federal laws. Under no circumstances will a Care Net affiliate sell or distribute a patient's personal information. So, as for the accusation that centers “reserve the right to reveal or sell personal info for ‘morally compelling’ reasons,” this is again, incredibly misleading. All medical practices do the same for very good reason – if a 14-year-old patient comes to them and reports being abused by her parents, then all medical professionals retain the same right to report that information to the authorities. It’s ironic that Planned Parenthood would single this issue out since they have been caught on video failing to report sex trafficking and abuse of minors who visit their clinics.

The flyer also has the same anti-religious undertone that many other attacks against pregnancy centers have; namely the notion that simply being faith-based is, in and of itself, a source of mistrust among the general public. So, in their list of negative characteristics of pregnancy centers, they state that they are “faith-based organizations that oppose abortion. They have religious missions and say they ‘express the love of Jesus Christ.’” Again, this is a bullet point in a list of things that are bad about pregnancy centers. Then, they take their attempt at slandering us one step further by saying that any taxpayer funding that pregnancy centers receive is a “clear violation of the separation of church and state.”

In fact, taxpayer funding of faith-based organizations is not a violation of the separation of church and state. Indeed, every President since Bill Clinton has supported faith-based initiatives to ensure that faith-based organizations are given the opportunity to apply for government funding and are not discriminated against in the funding process simply because they are faith-based. This has been one of the few bi-partisan efforts that has survived the last 20+ years. Moreover, the government funding that pregnancy centers receive is for long-standing federal programs that provide fatherhood and marriage education and sexual risk avoidance education, efforts that are separate from a center’s work to educate clients about pregnancy decisions. Planned Parenthood must know all of this, but they’d rather lie about it.

Another oft-repeated accusation that Planned Parenthood digs up again for this latest attack is that pregnancy centers use “scare tactics” by “lying about risks of substance abuse or self-harm.” In fact, every data point we share about the potential risks of abortion is taken from an academic or government study, and is well-cited. As with every piece of information that Care Net-affiliated pregnancy centers share, we ensure that it is taken from a reliable source and presented in a balanced way so that our clients understand what the risk factor is and what the likelihood is of experiencing that risk factor. For example, according to a study that was published in the Journal of Child Psychology and Psychiatry, there is a statistically significant increase in risk for clinical depression and anxiety among women who have abortions. Furthermore, in a study published in the academic journal, Addiction, there is also a statistically significant increase in risk for drug and alcohol abuse after an abortion. These are reputable studies from well-respected journals.

Planned Parenthood, on the other hand, does not want to share this kind of information with their paying clients so as not to risk a potential customer refusing a procedure from which Planned Parenthood profits.

The accusation that takes the cake, though, is the false allegation that staff at pregnancy centers are “rarely medically trained.” First of all, there is no requirement anywhere that all staff, at a pregnancy center or an abortion clinic or even a doctor’s office, have to be “medically trained.” Are the receptionists at Planned Parenthood abortion clinics “medically trained”? These are the sorts of half-truths, and dare I say scare tactics, that Planned Parenthood tries clumsily to use to “get us.” But they are so easy to see through.

Now, when it comes to staff that actually need to be medically trained, according to Care Net’s affiliation standards, all of our centers that provide medical services do so in accord with their state laws and operate under the direction of a licensed medical director. I’ve written that true sentence so many times, I’ve lost track. Planned Parenthood knows the truth and ignores it for propaganda purposes.

Scripture says, famously, that the truth will set you free. Planned Parenthood doesn’t want the paying public to be free from the bonds of abortion; they don’t want to set the captives, their paying customers, free. And they know that the services – given freely with love and compassion – provided at pregnancy centers are freeing. Such freedom costs abortion providers money and power, two things they appear to be unwilling to give up, even if the lives of women, men, and unborn children are at stake.

It’s always good to make lemonade when life give you lemons, so we view these attacks on pregnancy centers as an opportunity to help the public understand the truth about pregnancy centers. Care Net-affiliated pregnancy centers have saved the lives of over 677,000 unborn children in the past 10 years. In the last three years, they have provided nearly $200 million in free services to women, men, and families in communities across the country. And over 97% of clients who have visited a Care Net-affiliated center who answered an exit survey reported that they had a positive experience at the center; this is a favorability rating higher than the iPhone and Netflix.

In short, pregnancy centers are valued members of their communities, providing services, for free, that are rarely found elsewhere. And that is a truth we will never hide. 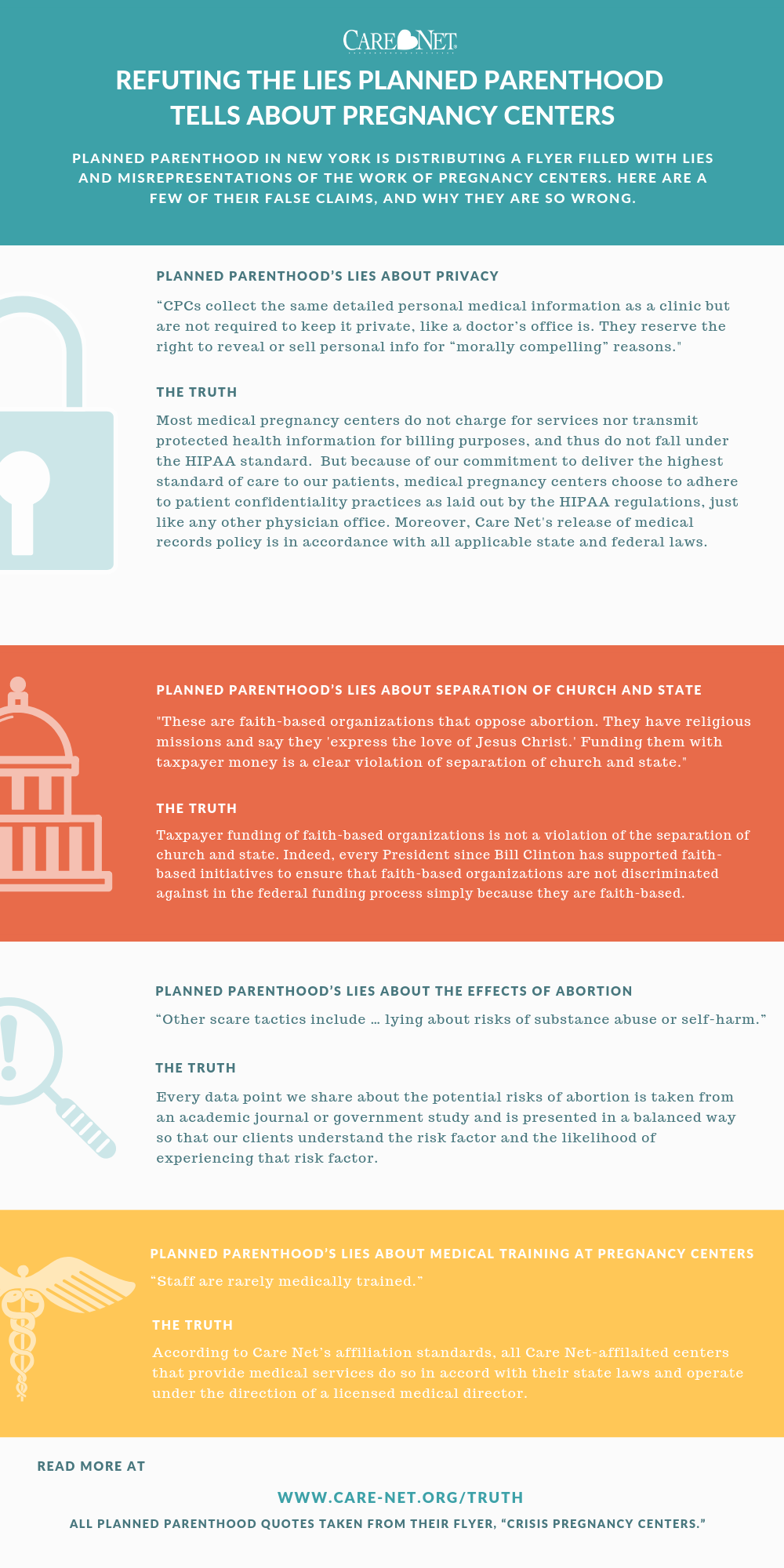