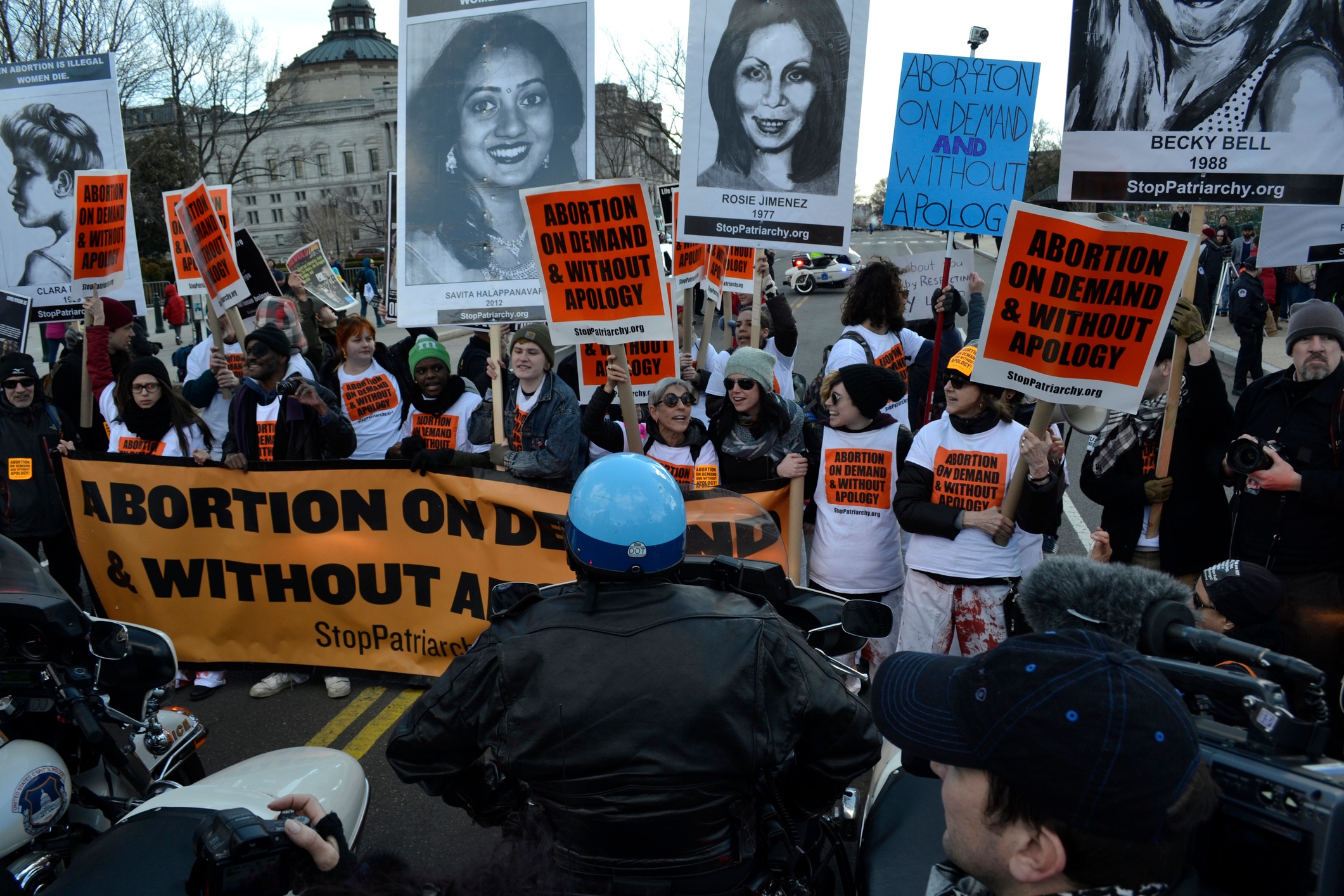 Michelle Wolf’s controversial “Salute to Abortion” aired July 8th. The segment of her show The Break, hosted by Netflix, reduces a complex and painful moral issue to politics, gender wars, and flippant oversimplifications. She tries to celebrate abortion and laugh at those who oppose it, but like the #ShoutYourAbortion campaign, her salute falls flat because women are often motivated to choose abortion because they face serious difficulties, whether that be in their relationships, their careers, or their financial situations. In other words, abortions aren’t worth celebrating. But Michelle Wolf is determined to try. She made several claims in her bid to support abortion that are worth addressing because Michelle isn’t the only one making them.

Following her opening remarks, Wolf reassured her audience, “Some people think abortion is ‘killing a baby.’ It’s not. It’s stopping a baby from happening. It’s like back to the Future, and abortion is the DeLorean. Everyone loves DeLoreans!”

If by “some people” Wolf means the scientific community, then she’s right. Life begins at conception, and every child that is aborted had its own unique DNA – its own personhood – which was ended. Wolf confuses abortion for contraception. While contraception prevents a child from ever being conceived, abortion removes the child from the uterus after it has been conceived, killing it.

Next, Wolf brought up another popular argument. “I know some people call themselves pro-life, but pro-life is a propaganda term that isn’t real, like healthy ice-cream,” she said. “First of all, these people are anti-abortion, which means they’re anti-woman! If these people were pro-life, they would be fighting hard for healthcare, childcare, education, gun control, and protecting the environment.” Later in the segment, she said, “Anti-abortion people do not care about life, they just care about birth!”

Broken down into its parts, Wolf is claiming three things:

2. If people were really pro-life, they would be pro- governmental solutions to societal problems that affect people’s quality of life.

3. Pro-life is a false term because pro-life supporters really just care about birth, not life, so they should just call themselves “anti-abortion.”

Pregnancy centers and those who are Pro-life are the exact opposite of anti-woman. At Care Net, we are pro-abundant life. We seek to help mothers, fathers, and children embrace abundant life. The data shows that far from feeling rejected or devalued, women who go to our pregnancy centers find compassion, hope, and help. Clients at Care Net have a 97% satisfaction rate. That doesn’t happen when a woman feels like she doesn’t matter. Also, Wolf’s claim dismisses the opinions of all women who are pro-life, like myself. Personally, I find dismissing a large percentage of her fellow females’ opinions to be pretty anti-woman.

Wolf plays the language game by trying to redefine “pro-life” to mean “pro-political-solutions-to-social-issues.” “Pro-life” means we think all lives have dignity and are worth protecting. We want to save the lives of the unborn, and provide support for women and men facing difficult pregnancy decisions. That belief does not dictate our political opinions in other areas. There’s no direct link between supporting these kinds of policies and protecting the dignity of life. If there was, Wolf would be the one fighting for the lives of the unborn, since she clearly supports these policies.

Care Net seeks to provide guidance and support to women and men both during their pregnancy decision and afterwards. We provide services and resources to mothers and fathers after their child has been born, like diapers and parenting classes, also classes about addiction, post-abortion healing classes, and other classes for women and men. While it’s true that we are anti-abortion, that is like calling abortion supporters “anti-life.” It’s inflammatory and reductive. Care Net’s whole mission is that we are pro-abundant life! We are so much more than “anti-abortion.” This is an attempt to rebrand those who support abundant life as merely “anti-abortion,” as if all we cared about was stopping women from having abortions.

Wolf went on to say, “Men, I’m sorry, I’m sure this brings up a lot of feelings and thoughts and points that you wanna make and I just want you to know, that’s all very irrelevant.” While her opinion is a common one, I wanted to point out several objections.

First, abortion does impact men, so they have a say. Many men struggle with grief after taking part in an abortion or going through a miscarriage. But men often carry this burden in silence, because they feel like it is irrational to have these feelings. However, even if men don’t have a legal say, they have a moral responsibility for the pregnancies they participate in, and therefore, are affected significantly by abortion.

Second, trying to deny people’s agency to debate and combat moral issues because they will never experience the injustice doesn’t make sense. Male police officers and politicians routinely fight against sex-trafficking, even though they will never experience it. Should they do nothing? I will never be discriminated against because I am black. But I think it’s wrong when that injustice occurs. Apparently I’m supposed to walk right past if I see it happening though. Since it won’t happen to me, my opinion is irrelevant.

Third, abortion isn’t about power dynamics between genders. It impacts everyone involved – the mother, the father, and the child. Abortion also affects more than just the people directly involved - it impacts the loved ones of the woman and it impacts the world – because a life has been snuffed out. Abortion isn’t just about gender, race, class, religion, age, or any other category of humanity, because it affects all of us.

Wolf made another set of claims which is a mix of inaccuracies and dangerous assumptions. “Abortions are a woman’s right, and I know acknowledging that is hard for some of you because that would mean you’d also have to acknowledge that women are naturally equipped to do the most powerful thing in the world: give life. While you guys are naturally equipped to do what: lift suitcases into the overhead compartment? If women embrace the fact that they control life, that makes it a lot harder for men to control women. Of course men are uncomfortable with that. They won’t even let us control a little bit of Star Wars.”

1. Women can make life, therefore they should have the choice to end it too.

2. Guys want to take away women’s right to end life, because they don’t have the    power to make life, and that means they are useless in comparison.

3. But if women embrace the fact that they control life, (by being able to make it and destroy it without male input) it will be a lot harder for men to control women.

Women don’t give life. We give birth. A child receives an equal amount of DNA from both parents, not to mention that conception involves a man and a woman equally. But even more fundamentally, life comes from God. No humans control it, whether men or women. Women don’t make or control life, so we don’t have the choice to end it.

Wolf’s second assumption tries to reduce the Pro-life movement to some kind of patriarchal repression. Pretending that an injustice which impacts all of humanity is just about a specific brand of feminism is gross reductionism. It also assumes that no woman wants to end abortion.

Third, life is a gift, not a tool to leverage control. Pregnancy is not about power. Wolf’s remarks reveal a kind of disdain for men which sadly, is not unique to her. It is sexism, plain and simple. It is no different than racism. Imagine if Wolf said that there was an issue that African Americans as a race had no right to say anything about. People are people. Judge them individually by their actions, not on something they have no control over.

Wolf ended her salute with a cheerful, “God bless abortions and God bless America!” The whole segment was to champion abortion for the sake of women’s rights. But Michelle doesn’t seem to care about women very much. She trivializes what is often a difficult and painful choice, and marginalizes the voices of her sisters who are pro-life. Telling women who are facing difficult and unexpected pregnancies to get an abortion while throwing confetti and wearing a star-spangled suit doesn’t help them. But we can offer them compassion, hope, and help.