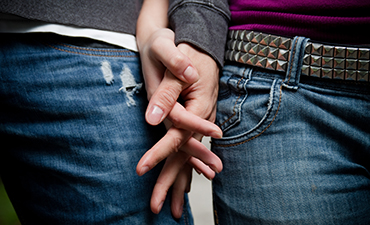 Joylene loved Tom. They had been together for what seemed like ages and it looked like they would finally be getting married before long. Things were going smoothly until she realized that she had forgotten to take several of her birth control pills.

She panicked. She had already missed her period and realized she might be pregnant.

Tom was more understanding than she expected. He told her that he would support whatever decision she made…which meant she still had to make the decision.

Joylene is not alone. According to our research, women turn to the father of the baby more than anyone else when considering abortion. In fact, women told us that the child’s father is the most important influence on their decision to have an abortion.

So Joylene began searching the Internet for information on abortion and other pregnancy options. She had not taken a pregnancy test yet, but needed to be ready.

She found the number for Care Net’s Pregnancy Decision Line and called in.

Her coach listened as Joylene shared her concerns. Joylene knew that each option had its own consequences, but wanted a clear explanation of the ramifications of abortion, adoption, and parenting the child. The coach knew just what to send her and offered a copy of Before You Decide. This engaging magazine would provide her with the medical and scientific information she needed, in a way that was easy to understand. Joylene agreed to look it over and gave the coach her email address.

Over the next few weeks, Joylene read through the magazine and considered the consequences of each option. Abortion seemed like it might feel good at first, but the long-term consequences and its impact on her baby outweighed any possible benefits. She emailed her coach and said that Before You Decide was insightful and helped her better understand her body and what was happening in her womb. She thanked her coach for sending her the right tools to help her make a decision.

Abortion was no longer an option for them. Not now, not ever.

Every day, countless women like Joylene face a pregnancy decision. For many, the first person they speak with is the baby’s father. In Joylene’s case, the father did not pressure her to have an abortion. This is important. However, while he was not a voice for abortion, he was also not a voice for life.

Planned Parenthood, NARAL, and the abortion lobby have succeeded in convincing many men that their role in a woman’s pregnancy decision ends at the moment of conception. For men who truly care about their partner and their child, the most they can do is say “I will support whatever decision you make.” Such passivity is often too little when a woman is facing the monumental turmoil of an unplanned pregnancy. What she needs is an indication that the man is willing to do the hard thing of providing for her and her baby.

Without that strength, women turn to the Internet to see what they find. Thankfully, due to the generosity of donors who support the Pregnancy Decision Line, Joylene encountered a voice for life. However, for each Joylene there are many women who are driven by the father’s passivity through the open doors of Planned Parenthood.

And another baby dies.

In order for the abortion tide to turn, pro-life people must become pro-abundant life people. We cannot simply articulate the message that the unborn child is a person worthy of protection, we need to address the familial and sexual environment surrounding that pregnancy. An important part of this transition is recognizing the role that fathers play in the pregnancy decision, and working to ensure that they are voices for life. Men need to be equipped and challenged to take responsibility for the consequences of their sexual experiences and not pass the buck off to their girlfriend or worse, compel her to commit an abortion.

This requires that our pregnancy centers and, most importantly, our churches have programs and materials dedicated to men to help address their needs in the pregnancy decision process.

Planned Parenthood has played the game of convincing men to either encourage abortion or remain passive. Either way, Planned Parenthood wins. Its time that pro-life people address the single most influential person in a woman’s pregnancy decision: the baby’s father. As pro abundant life people we must stop pretending that this issue is one solely involving women.