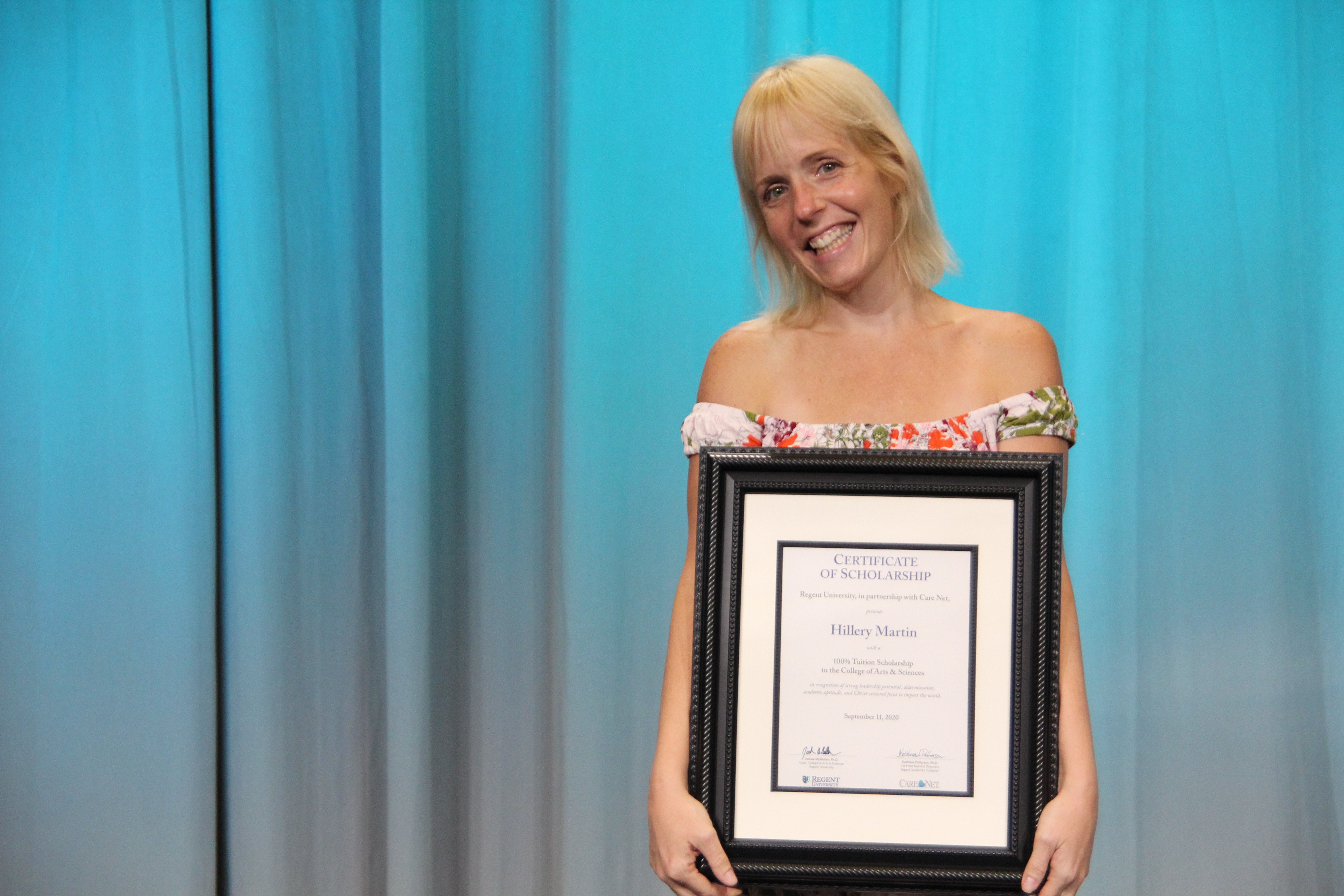 Lansdowne, VA - Hillery Martin and her son Kai are both miracles. In December, 2017 Hillery was in the hospital recovering from a near-fatal car accident when doctors discovered she was pregnant - something Hillery never expected since she was told she could not have children. Hillery persevered through what she describes as intense pressure from the doctors to abort her child, and now her goal is to provide the best life for her son Kai: a goal which her full tuition scholarship from Regent University, in partnership with Care Net, will help her accomplish.

“Attending Regent University, a school that I know honors my convictions as a Christian, would help me get the most viable degree possible, which is priceless, and [be] such a blessing for my family’s future,” Hillery shared in her application.

Hillery was nominated for this scholarship by Dorinda Henry, the Office Director at Choices Family Resource Centers in Avon Park, FL. “One of the first goals Hillery shared with us was her plan to further her education,” Dorinda shared. So far she has achieved many other goals in the last few years, including “finding a job, a car, and her own place to live.” According to Dorinda, Hillery is reliable, resourceful, diligent, and “determined and willing to do whatever is necessary to succeed.”

Hillery first came to Choices in 2018, when she was 27 weeks pregnant. She’d spent the first three months of her pregnancy in the hospital, recovering from a car accident that had left her with a broken back, a fractured neck, and a nicked artery that almost took her life.

Doctors discovered she was pregnant a month into her hospital stay - after treating her with radiation and other medications that are unsafe for pregnancy. Fearing the repercussions of their oversight, Hillery says the doctors tried pressuring her to end her pregnancy. They raised the possibility that  her son would be malformed and born with brain defects. Hillry describes being put into quarantine; she felt the medical team tried to scare her into choosing abortion.

Despite the pressure, however, Hillery stayed strong. “All I could see was a miracle and I couldn’t understand how they couldn’t see the same.” When Kai was born, Hillery says “he was perfect” and has met or surpassed every milestone for healthy children.

“When I first came to [Choices Family Resource] center, I was terrified because I was a first-time mom wearing a halo neck brace and unsure how I was going to provide everything I needed for my son. But now after going there for two years, I actually feel like a mom versus feeling ill equipped! Choices have done more for me than I could ever imagine,” Hillery said. The center provided her with much-needed baby items and also helped her build connections in the community that ultimately helped her find her current job, house, and car - and now her scholarship to Regent University.

Hillery plans to major in cybersecurity, both so she can provide financially for her son and also have the knowledge to help him safely navigate the online world as he grows up.

“Growing up in foster care, I dealt with a tremendous amount of instability and future uncertainty,” Hillery explained, “Now becoming a mother, I have realized the impact that my childhood had on the choices and decisions I made early in life. My goal is to provide a stable and secure household for my son, then he won’t have to deal with those same fears that I did.”

Hillery accepted the scholarship at Care Net’s 27th annual conference in Orlando, FL on September 11, 2020. She was joined by Dorinda Henry and her son Kai. Kathleen Patterson, Director of the Doctorate of Strategic Leadership Program at Regent University and Care Net board member presented the scholarship. Care Net Vice President of Center Services and Client Care Cindy Hopkins was also present.

You can watch Hillery's testimony here: Care Net and Regent University plan to give another pregnancy center client a full-tuition scholarship at next year’s Care Net National Conference in San Antonio, TX, August 23-26. The application process will begin next summer.

Clients are nominated by their local pregnancy center, submitting applications that are reviewed by a scholarship committee at Care Net. A successful applicant demonstrates strong leadership potential, determination, academic aptitude, and the ability to thrive in Regent's rigorous program.

Regent also offers a 25 percent tuition discount to employees of Care Net affiliated pregnancy centers and their spouses, and dependents. The college is one of the highest-ranking universities in the nation and is the #1 online accredited university, according to study.com.

Founded in 1975, Care Net supports one of the largest networks of pregnancy centers in North America and runs the nation's only real-time call center providing pregnancy decision coaching. Since 2008, Care Net centers have saved over 603,000 unborn lives from abortion. Acknowledging that every human life begins at conception and is worthy of protection, Care Net offers compassion, hope, and help to anyone considering abortion by presenting them with realistic alternatives and Christ-centered support through its life-affirming network of pregnancy centers, organizations, and individuals. Learn more at www.care-net.org.