5 Fears That Keep Pastors from Preaching about Abortion

I recently found myself in a discussion with an extended family member about parenting.   This loved one turned to me and said, “I never wanted to tell my children what to believe.” To which I responded immediately, “Why not? Everyone else is trying to tell your children what to believe, why wouldn’t you want to?” From television, to advertising, teachers, peers, news media, and social media, children are constantly bombarded with messages about what to believe.

Unfortunately, this is often the subconscious approach many pastors take about the issue of abortion and the church. For varying reasons, pastors don’t want to tell their church what to believe on this vital issue of justice, equality, and the glory of God. The reality is that everyone is trying to tell God’s people what to believe about this issue. Why wouldn’t those charged by God to instruct His people in the Scriptures, be instructing them with the truth?

A great axiom of ministry is, “as the pulpit goes, so goes the church.” The preaching of God’s Word in a church dictates how the people view the Scriptures, and it’s teaching. More specifically, what is emphasized from the pulpit is often most embraced and embodied by God’s people. I’ve seen this dynamic play out over and over again. This realization is a heavy weight for any pastor to bear, deciding what to preach on, and what not to.

Over the course of eleven years in pastoral ministry, and another two years as the director of a pro-life ministry, I have had many conversations with pastors about preaching on the sanctity of human life and abortion. Far too often, I have found that pastors are unwilling to engage the issue of abortion in their churches from the pulpit. Usually, it’s fear driving their decision. The result is that these pastors abandon their congregations on this issue, leaving the narrative to be written by the world.

From my discussions, I’ve found common fears that most pastors wrestle with. Here are five to consider:

I’m always shocked every time I actually hear these words uttered, but it happens more than I’d like to admit. A good friend of mine said, “If your church believes this is primarily a political issue, who taught them that? You’re the teacher. Correct them.” Otherwise rock-solid, biblically based preachers will somehow convince themselves that because this issue has political out-workings, and happens to be one of the most divisive issues in our culture, the discussion doesn’t belong in the church. Yet before this issue is a political issue, it is an unequivocally biblical issue of ultimate importance. What’s at stake? The truth about the glory of God displayed in the lives of His image bearers.

We live in a culture that embraces a philosophic pluralism, where tolerance is the highest virtue. The issue of abortion, instantly conjures up images of billboards, protests, and the “eccentric pro-lifer.” No group in our society has consistently been as stereotyped by media outlets as more intolerant than the crazy “right-wing conservatives.” To associate with this group can be virtually akin to wearing a scarlet letter, particularly within urban contexts that tend to be socially liberal.   Subsequently, many young pastors fear being thought of as out of touch or extreme if they address abortion. They convince themselves that it’s better to not address abortion at all, so it won’t get in the way of really preaching the gospel. 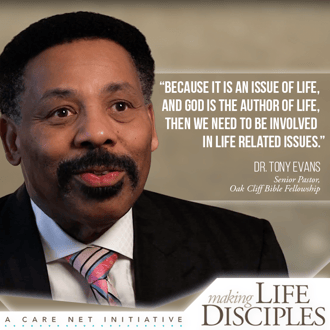 John Piper shared with me in an interview, that he experienced the pressure of not wanting to be a partisan, politically-oriented preacher. Yet, he saw a beautiful opportunity to address this tension. In the providence of God, Martin Luther King Jr. weekend and the anniversary of the Supreme Court decision on Roe v. Wade fall back to back. He decided to preach a sermon every year on racial harmony and the gospel, and the following week, a sermon on abortion and the gospel. This way, he preached one weekend on an issue typically associated with the political left, while the next weekend, preaching on an issue that is associated with the right. He explained that this gave him an opportunity every year to explain to his church that the Word of God is the standard of truth, not a political ideology or camp. As citizens of God’s kingdom, we preach the truth, regardless of whether it sounds right or leftward leaning.

Being a pastor of a church will stretch any man. The demands are high and the time a pastor has for study is often limited. Well-meaning pastors often fear they aren’t well versed enough in the issue of abortion to address it from the pulpit. This may be the case, but it doesn’t have to stay that way. There are resources available to help you become sufficiently equipped to address this issue with truth and compassion if you will avail yourself of them. Resist the tendency to shy away from this issue because it might require you to study the Scriptures, and face the reality of what abortion is and does to women and men. It is certainly easier to stick your head in the sand, but keep in mind that in so doing, you may also forgo the remarkable opportunity to see God heal, restore, correct and admonish his people.

Whenever I have preached on the issue of abortion, I have had women after the service come to tell me they had an abortion, or had been affected by abortion in some way. Their stories are heartbreaking. There is much healing and work to be done after a sermon, it is only the beginning. Pastors intuitively know this, and are acutely aware of the potential depth of impact preaching on abortion will have. Instead of addressing the hurt and bondage of those in his congregation, pastors choose to ignore it altogether because they feel completely overwhelmed with pastoral care demands already.

To these pastors, I would encourage you to trust in the sustaining grace of our great God. Do not suppress the conviction of the Spirit to preach on this issue. It is often in our times of greatest need that the Lord’s provisional glory is seen most clearly. Pray the Lord would send somebody to come alongside you to help. Develop a relationship with your local pregnancy help center, as they often have post-abortive healing classes. Do some preparation before preaching, have a plan as to how you will minister to women and men affected by this issue, and then trust God with the outcome.

Silence speaks. Silence on the issue of abortion communicates that this is an issue not to be discussed because it’s either too shameful, or too difficult to address.   If you choose not to preach about this issue, those affected by abortion are implicitly told to also keep this area of their life in the shadows. They are silently alienated. They are emotionally driven away.

Some fears are good, provided they don’t paralyze us. The fear of being hit by a car, prevents us from running out into the street without looking. This is good. But there are times when we must cross the street to get where we need to go. If this the case, what do we do? We go to the cross walk, we look both directions, and we cross safely.

The fear of not wanting to hurt someone in your congregation is a good fear. This fear can cause you to pause, think it through, and proceed cautiously. But if this fear prevents you from ever preaching on this issue, your inaction will actually hurt those in your church who need to hear the hope of the gospel applied to a major issue in their lives.

Statistical research consistently reveals that the issue of abortion has massively affected people in our churches. It brings with it shame, condemnation, and bondage. Preach in such a way that you invite people who have been affected by abortion to be honest and open. Then, by God’s grace, pray not only for them to experience the forgiveness of Christ but also his freedom and healing.

The Vox Project was founded in 2014 by Mark Campbell.  Mark was a church planter in the Washington DC area, and served as a pastor in various roles for over ten years, before moving to Louisville, KY.  Mark and his wife Jaime are members of Sojourn Community Church. http://www.voxproject.org/