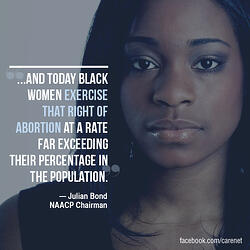 February is Black History Month. It’s an annual celebration of achievements by black Americans and a time for recognizing the central role of African Americans in U.S. history. And as an African American female benefiting from my ancestors that have gone on before, I should be celebrating, right?

I’m not ready to celebrate just yet.

Fifty years ago, the late Daniel Patrick Moynihan published his groundbreaking federal study, “The Negro Family: The Case for National Action.” In its opening sentence the report stated, “At the heart of the deterioration of the fabric of Negro society is the deterioration of the Negro family.” Since then, that deterioration has accelerated dramatically.  Today, only 17 percent of black teenagers reach age 17 in a family with both their biological parents married. In no state does this percentage exceed 30 percent.

In 1939, the founder of Planned Parenthood, Margaret Sanger, crafted what she called “The Negro Project”: A plan to enlist pastors to “straighten out the idea . . .  if it ever occurs to any of their more rebellious members” that abortion is a humanitarian effort, not a plan to exterminate the Negro population.  Since then, abortion has been promoted and celebrated by leaders in the African American community.

The destruction of the black family has only accelerated with the advent of legal abortion. And how can I ignore the effects of abortion on the black family when today over 70% of black babies are born out of wedlock?

But here is where it gets ironic: blacks are the most church-attending ethnic group in America.  Research shows that church attendance and Bible engagement bear fruit that impacts all aspects of life.  Regular religious worship conveys human strength in all the outcomes measured in US federal surveys (and there are hundreds of them). How is it that what conveys strength in abundance does not benefit marriage in the black family and does not yield the fruits of chastity and stable marriage in the black community? Good questions.

Accordingly, Care Net has plans to engage, train, and equip churches -- beginning with those in urban and African American communities – to stand on the truth of the gospel and shine light into the darkness, so that lives will be transformed and women and men will be empowered to choose life for their unborn children and abundant life for their families.

My prayer is that black families will once again be whole and committed to holiness.

So, while I acknowledge the fact that February is Black History Month and that in my lifetime progress has been made toward a pro-life stand in the African American church and community, I mourn the loss of over 15 million black boys and girls that have been sacrificed on the altar of abortion and the cultural acceptance that it has earned within the black community and also, the black church.

The day that abortion clinics are no longer predominantly in minority communities, the day that New York City, my home town, no longer has the highest percentage of black abortions in the nation, and the day that black pastors everywhere proclaim life and truth and hope from every pulpit in the U.S. will be a time for me to celebrate Black History Month.  It will be a time I can celebrate the achievements of black pastors and black churches as we stand in the gap for the innocent unborn.

I’m new here at Care Net and I believe just because abortion is in our past it doesn’t have to be in our future!  I long for the day to celebrate the lives, marriages, and families that are thriving in the black communities around our nation.

“Today I have given you the choice between life and death . . . Oh, that you would choose life, so that you and your descendants might live.”  Deuteronomy 30:19 (NLT)

Choose life, and then we’ll all have something to celebrate.