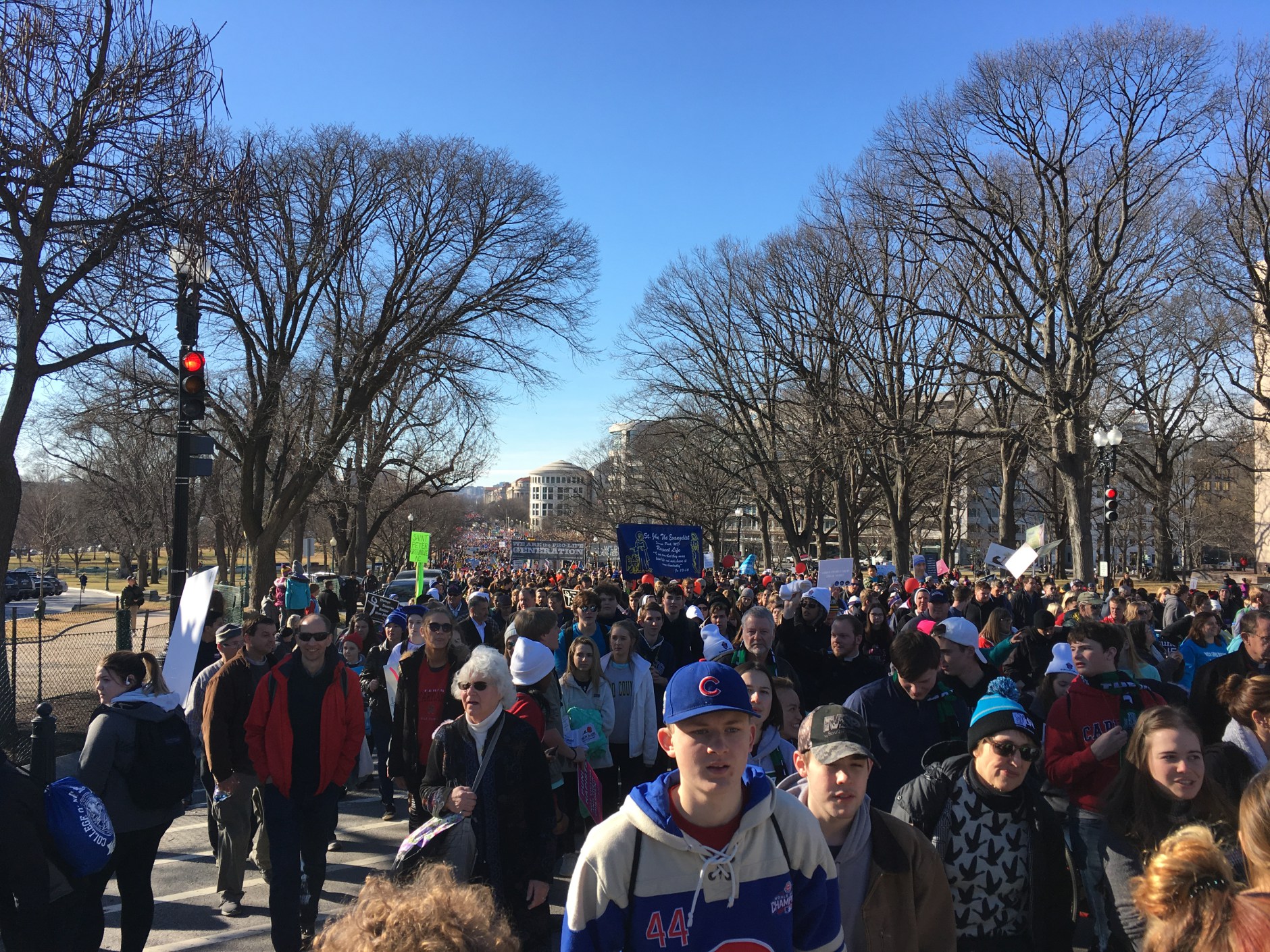 What the March For Life Reveals About Churches and Abortion

A person is a person no matter how small. – Dr. Seuss

Last week marked my one year anniversary with Care Net and my second year participating in the March for Life. It was the 45th march protesting and marking the anniversary of Roe v. Wade, the now infamous Supreme Court decision that legalized abortion through all nine months of pregnancy.

There were over one hundred thousand[1] folks there for this peaceful demonstration, although it got almost no coverage from the mainstream media. CNN, for example, largely ignored the march but prominently featured the women’s march (I guess unborn women don’t count?) that evening and the next day, live-streaming events in two locations.

Why such bias? One of the biggest reasons is because “It is taken today as a truism that in order to be a feminist you must be ‘pro-choice’. The right to abortion is often deemed to be the most fundamental right of women, without which all others are said to be meaningless.”[2]

As I’ve written previously, I’m certainly an advocate for the equality of women. I’m confident, however, that a civilized society can find a way to protect one life in a way that doesn’t rely on destroying the life of another—especially a pre-born, defenseless child.

Our art often mirrors our values: In visually stunning 2017 sci-fi action movie Blade Runner 2049, the second installment in the Blade Runner franchise, there is a particularly harrowing scene [Spoiler alert, although not a plot spoiler!].

The main antagonist, Niander Wallace played by Jared Leto, is a “replicant” manufacturer—a god-like character who is trying to create “replicants” that can reproduce.  In the Blade Runner films a replicant is a bioengineered android.

Again, in this chilling scene, a newborn replicant drops out of a womb bag as a fully formed adult female.  Covered with amniotic fluid, she is extremely feeble and can barely stand. Using some kind of floating scanners, Niander examines her closely and finds her infertile.  He then takes a scalpel, slices her womb, and kills her because she is deficient—not what not he wants.

The scene is meant to horrify and introduce us to one of the story’s main villains. Niander’s savage taking of the “newborn’s” life makes us fear him.  Part of what makes the scene work is that we connect the violence done to the “newborn” with a fully formed—otherwise perfect—adult female.

Somehow, today in America, we’re not similarly horrified by the violence done to a unborn child. They’re among societies’ “invisibles”. Their embryonic form hides the monstrosity of our own disregard for life. For many, It’s not a real child.  It’s just a “fetus” or a “product of conception.”

Ultrasound technology continues to help change these perceptions, but we still have a long way to go. Here are some fresh stats:[3]

There are, however, some positive trends on the horizon: The faces of those who march are getting younger. Also, here are three encouraging things I learned at the Evangelicals for Life conference last week (held for three days coinciding with the march):

All this begs the question: how does the Church best continue to care about and work to change things?  Here are three ways that also address the stats in bold above:

Finally, take heart! As Christians, we shouldn’t be marching primarily for political solutions. Our mind’s eye can’t be fixed on Washington’s power plays. Being enamored by and fighting for political power has and will continue to lead us seriously astray. Our misdirected focus causes us to devalue gentleness, respect, grace, and the ministry of the Holy Spirit—including how his power most often shines in weakness. As believers in Jesus, we march to the beat of a different drum and we serve a different King who promised, “…I will build my church and the gates of hell will not prevail against it.” (Matt. 16:18-ESV)

And as Dr. Tony Evan’s recently said, “God’s not going to skip the church house to fix the white house.”[5]

[1] Number given by March for Life in their follow-up email.

[3] Cited by Pastor Todd Wagner of Watermark Church at the Council for Life Pastor’s Breakfast in Dallas, TX on 1.9.18.

[4] From The Purpose-Driven Church.

Activate your free subscription to get exclusive access to life-affirming analysis of the week’s top stories from our experts with 40+ years of experience in pro-life work.