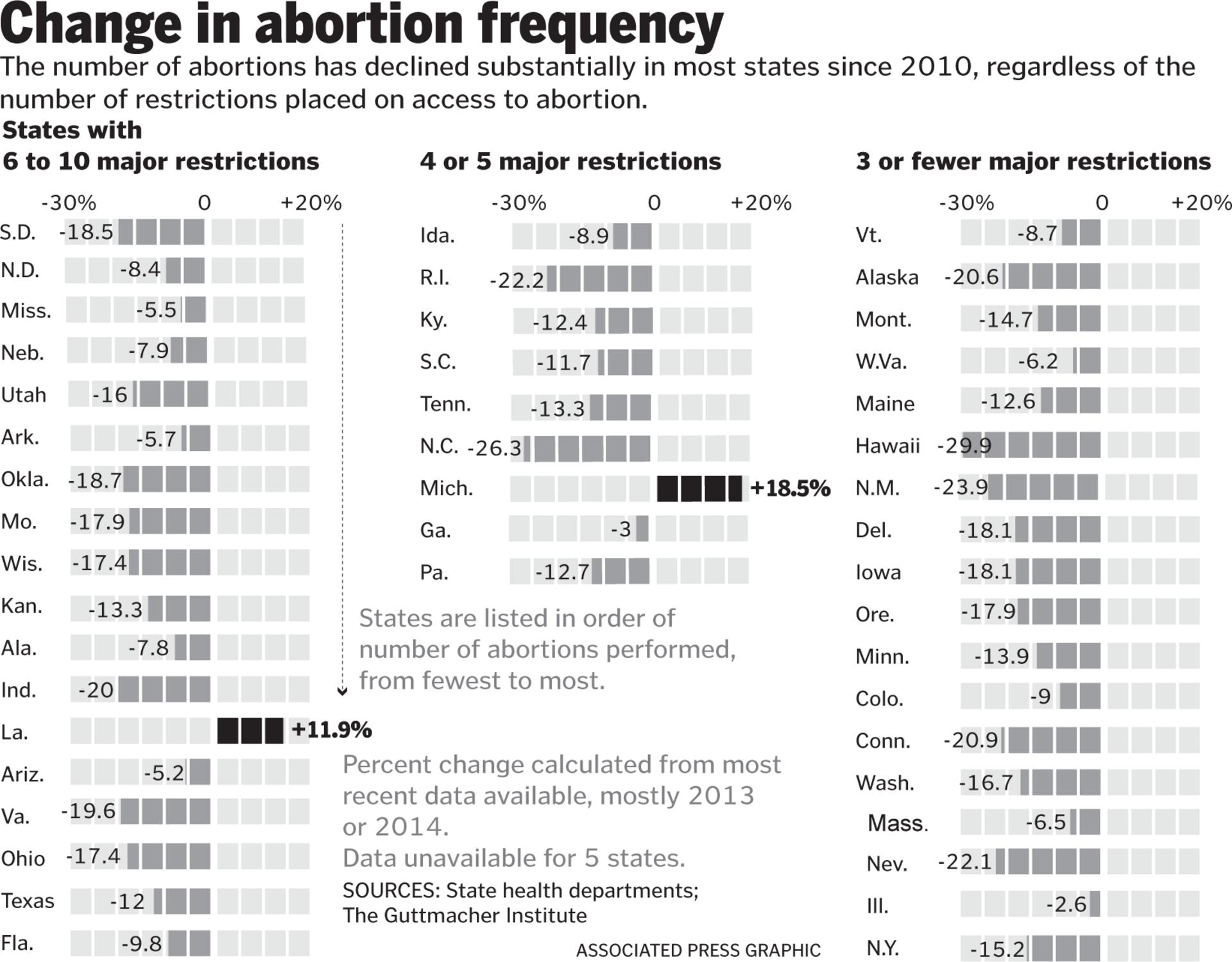 On June 7, the Associated Press released an exclusive about the decline in abortions nationwide. They conducted a survey by gathering the abortion numbers reported to the health departments of 45 states. What they found was a 12 percent decrease in the number of abortions from 2010-2014. In nearly every state, the abortion numbers have dropped, both in red states and blue states.

Why are the numbers dropping? The AP exclusive offered various explanations from both sides of the abortion debate. One possibility was the amount of legislation passed restricting access to abortions. The Guttmacher Institute reports that 267 abortion restrictions have been enacted in 31 states since 2011. States with strong anti-abortion laws, such as Indiana, Missouri, Ohio, and Oklahoma, have seen abortion numbers drop more than 15 percent since 2010. At the same time, abortion numbers have dropped at the same rate in liberal states with unrestricted access to abortion, New York, Washington, and Oregon.

While abortion restrictions have a role in the decreased number of abortions, there is something else at play. How else could abortions fall in states where the right to abortion is heavily protected?

Pro-choice organizations attributed the decrease in abortion numbers to an increased use of contraceptives. In order for this to be true, the number of unintended pregnancies would also have to have decreased alongside the number of abortions. The National Review responded to this claim and explains why it is an unpersuasive argument.

There must be a third possibility behind the decline in abortion numbers that accounts for a decrease despite state support of abortion and the constant rate of unintended pregnancies.

The third option is a change in public attitude towards abortion. The National Review pointed out that by "offering alternatives to women facing unplanned pregnancies, enacting legislation, and shifting public opinion, pro-life efforts have succeeded." Across the nation, people are beginning to see that abortion is not the answer, and that there are better options to choose from. Regardless of if it is New York or Oklahoma, the message of life is increasingly resonating with Americans.

The shift in society’s opinion was seen in a recent Gallup poll studying where Americans aligned themselves in the abortion debate. While Gallup proudly noted that 50% of people identified as pro-choice, we noted that only 29% fully identify with the pro-choice stance that abortion should be legal in all circumstances.

As support for abortion wanes in the public eye, the decisions made by pregnant women determines the number of abortions. When women and men facing pregnancy decisions are presented with alternatives to abortions and choose life for their unborn child, the abortion numbers will fall.

If the statistics from the Associated Press’ survey are correct, the number of abortions has fallen 12 percent nationwide in the past 5 years. From 2002-2011, the abortion number fell 13 percent. Not only has the abortion number continually decreased, it has begun to fall faster.

Let us continue our mission to reach out to women and men facing pregnancy decisions, that even more will choose life.

A diagram listed the abortion numbers decline alongside the number of abortion restrictions was found on The Boston Globe.