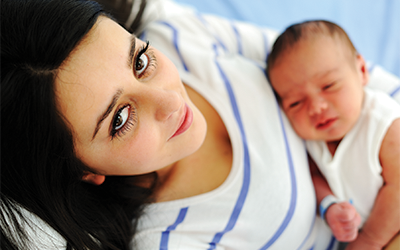 In Need of a Moral Compass: Kaylee's Story

When Kaylee called PDL, she was pregnant and wanted an abortion. The baby's father and her mother were encouraging her to keep her baby... but was that enough?

Roughly twenty-five percent of teenage girls in the U.S. will get pregnant at least once by age 20 according to the most recent data from the National Center for Health Statistics. Therefore, it is not uncommon for Care Net’s Pregnancy Decision Line (PDL) coaches to receive calls from teenagers who are scared and looking for a non-judgmental third party to provide guidance.

Such was the case when Kaylee* contacted PDL. After experiencing pregnancy symptoms, Kaylee had visited a clinic and learned that she was at the end of her first trimester. By the time she called PDL, she was well into her second trimester and “desperately trying to find money for an abortion.”

However, unlike most PDL callers, the primary influencers in Kaylee’s life -- the father of the baby and her mother -- were supportive and encouraging her to keep the baby.

It quickly became clear to the PDL Coach that the only thing preventing Kaylee from choosing life for her unborn child was lack of a “moral compass.” As if she were deciding whether or not to get a new pair of shoes, she told the PDL Coach, “I’ve thought about keeping the baby if I can’t get the money for an abortion.”

Recognizing the need for moral clarity, the PDL Coach skillfully steered the conversation towards God. Kaylee shared that she believed in God, but is not really into church. However, she was very open to listening and allowed the Coach to share the Gospel, provide information about abortion, give a referral to a local Pregnancy Center, and pray for her.  She also agreed to receive follow-up calls from the Coach.

In subsequent calls, Kaylee’s position softened from “I’m desperately trying to get money for an abortion … to “I’m waiting to see if my boyfriend can get money together and if not, I will probably keep the baby” … to “I’ve been praying and am becoming more comfortable with the idea of having a baby” … to “I’ve decided to have my baby.”

Kaylee never shared whether she made a profession of faith in Christ, but it was evident to the PDL Coach that interjecting Jesus into the conversation was the turning point in her thought process.

This is why it's so critical to be Pro Abundant Life instead of simply Pro-Life. Saving lives for this world is critically important. But saving lives for eternity changes everything. True and lasting transformation only comes through a relationship with Jesus Christ.

Through our research, Care Net has learned that even Christian women can be in need of this transformative relationship with Christ - 4 in 10 women were regularly attending church when they had their first abortion.

This is why Care Net is so excited about our new Making Life Disciples (MLD) curriculum. MLD equips churches to minister to those considering abortion within their congregation by offering compassion, hope, and help during crisis. Moreover, churches learn how to disciple this group of people, many of whom are facing single parenthood, or starting new families. These MLD churches also partner with local pregnancy centers to provide a welcoming church home and on-going discipleship to pregnancy center clients.

When the Church gets involved, those considering abortion like Kaylee will receive the love, discipleship and support they need to grow deep roots in their faith and experience abundant life.

When you generously support Care Net, you stand ready to share the Gospel at every possible point of contact with women and men considering abortion.

Will you please consider a generous, tax-deductible gift today to help us reach more people with the transformative Good News of Jesus Christ?

* Name changed to protect the identity of individuals.