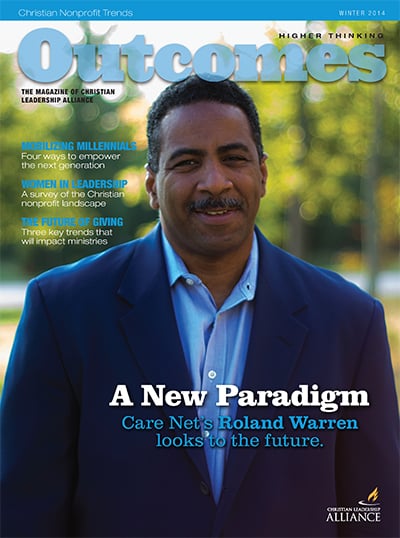 Originally published in the Winter 2014 edition of Outcomes Magazine, The Magazine of Christian Leadership Alliance. 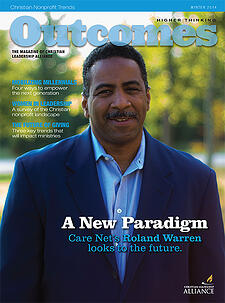 Prior to his tenure at Care Net, Warren served as president of the National Fatherhood Initiative (NFI), where he was dedicated to improving the well-being of children by increasing the proportion of children who are raised with involved, responsible and committed fathers.

Warren is an alumnus of Princeton University with nearly two decades of experience in the business world, and more than a decade of experience in nonprofit leadership. He has an M.B.A. from the Wharton School of the University of Pennsylvania. He is married to Dr. Yvette Lopez-Warren and has two sons.

As Care Net president and CEO, what do you see as the future of the pregnancy center movement?

I started my keynote at this year’s Care Net conference by quoting “I Dreamed a Dream” from Les Misérables. If you consider its narrative, that song is about a young lady who ends up getting pregnant. The child’s father leaves her. She chooses life, but look what happened...how hard it is for her and for her child.

Like that young lady, women who come into pregnancy centers — or even Planned Parenthoods for that matter — face unplanned pregnancies and have hopes and dreams and aspirations.

God has put on my heart that our work is not just about saving a baby, as important as that is; it’s also about raising a child. We can’t just be pro-life. We must be pro-abundant-life.

God framed this pro-abundant life concept for me through the biblical story of Mary and Joseph. Mary, from her perspective, faced an unplanned pregnancy. She had hopes, dreams and aspirations for her life, and none of them at that moment included a baby.

Sometimes in the pro-life movement we like to share that Mary said, “may it be to me as you have said” and chose life. We end the story there. But that’s not the end of the story. It’s just the end of the beginning.

What did God do to make sure that her unplanned pregnancy wasn’t a crisis pregnancy? He sent an angel to Joseph. And God asked Joseph to do two things — to be a husband to Mary and a father to the child growing inside of her.

From my perspective, that’s really important because I think we’ve lost that narrative. God didn’t give her a social worker or a check. He helped create a family. And central to that was Joseph.

In many ways, Joseph had the same challenges any abortion-minded man today would have. He too had hopes, dreams and aspirations that didn’t include a baby. But he did what the Angel of the Lord had commanded and stepped into that responsibility.

I think that back in 1973 when abortion was legalized, we should have framed our argument from that perspective. We should have said, “We are against abor-
tion because we really think that children should have fathers and mothers from the point of conception on as God designed.”

I once had a reporter ask: “Is Care Net more for the baby or more for the woman?” And I said, “That’s a good question, but it’s like asking me am I more for breathing in or breathing out. They’re both essential to life. But I also reject your entire paradigm, because with both your examples someone is excluded — men.”

If you look at the story of Joseph and Mary, you see the solution to the problem — marriage and family as God designed.

When Herod wanted to kill Jesus, who did God go to? He went to Joseph. He sent an angel to Joseph and told him: “Take them into Egypt.” Provide and protect the sanctity of life. There has always been a role for men in this. It’s right there in Scripture. God has put on my heart to help Care Net as an organization — but also the pro-life and pregnancy center movement — to really capture that vision. That’s how children end up having abundant life as God designed it. 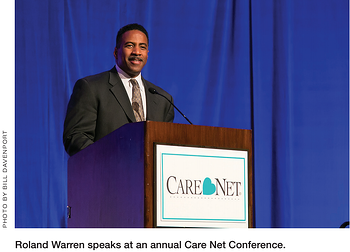 So how do pregnancy centers engage fathers more deeply?

First, we’ve started to reframe the work that pregnancy centers do around fatherhood under something that we’re calling “The Joseph Project.” Basically we’re trying to create Josephs. Our tag line for it is “One Man, Two Missions” — husband to her and father to the child growing inside of her. Provide and protect.

We’re trying to inspire men to step into that Joseph role. We’re using that as a framework to rally folks in the culture. And now we’re linking the abundant life piece to that. This allows us to focus on both Mary and Joseph, about the centrality of marriage to their story and to the stories of those we serve.

The second thing is that we want to engage the community of men to come alongside pregnancy centers. If you think about what Joseph did, at its core he protected the vulnerable. This is going to be a way for us to rally men in general to do more and to be more engaged. If you go to the March for Life or if you go to our conference, it’s 96 percent women. Part of this is calling men to do what God has called them to do, not only on an individual level, but also on a corporate level.

We’ve partnered with National Fatherhood Initiative and some other entities to help pregnancy centers activate this on a programmatic level.

What societal trends are impacting what you’re trying to accomplish?

The issue has been framed improperly from the beginning. Even folks on the pro-life side have framed this as a woman’s issue. I mean, that was one of the first things that kind of struck me when I first got involved with Care Net when working at National Fatherhood Initiative. I learned that there really wasn’t a program for engaging the fathers.

I recall the context for my wife and I, who also faced an unplanned pregnancy and chose life. I knew how my decision to be a husband to my wife, and a father to our child, impacted our life decision. And I thought, “There must be more guys like me out there.”

This is hard work though. Men can be difficult to engage. And, frankly, you know, from a satisfaction perspective, it’s easier to kind of say “touchdown” once a baby is saved. And, by the way, that’s what the other side accuses us of. You know they even try to blame us for contributing to the growth of the single mother households. And you know what? That can happen if we’re not casting a broader narrative that talks about creating strong families.

Abortion is a worldview that leads to a certain action. It is about autonomy and enmity — autonomy, as in “my body, my choice,” which is always going to create enmity. It’s about separation. Separate the woman from the man, and then the woman from the baby.

Our side is about unity and community. We’re created by a God who embodies unity — the triune God: Father, Son and Holy Spirit. God created us in his image with a desire for unity and community. Our design, from God’s perspective, is that a husband and wife come together united in marriage. And what’s the first community? It’s the family.

What about engaging the church?

A broader work must be done to help the church. Promoting a culture of life is actually its work. The church is the bride. We’re in the wedding party. If you’re at a wedding and the bride isn’t coming down the aisle, you don’t tell the maid of honor to step in to keep this thing moving. Right? You send someone back to check on the bride.

The church has the ability to provide people with material support, discipleship, relationship support and marriage support — all these different things that pregnancy centers can’t provide long term. If we don’t connect those we serve with the church, it becomes more of a retail relationship; it’s transactional rather than transformational. And then we see them back in the pregnancy center again with a new guy and a new crisis.

What encouragement or advice would you share with other Christian leaders running nonprofits today?

I’m a business guy. I tend to view this work through that lens. I’ve always operated with the view that every good and perfect thing comes from the Lord. Some create a dichotomy between the marketplace and ministry that limits their ability to have the impact they need to have.

I would encourage folks not to do that. My view is that there are business principles that are transferable to ministry work, and I think leaders should be very aggressive looking at those models to see if there is an application in terms of the work that God has called them to do.
Previous post View all posts in this blog Next post