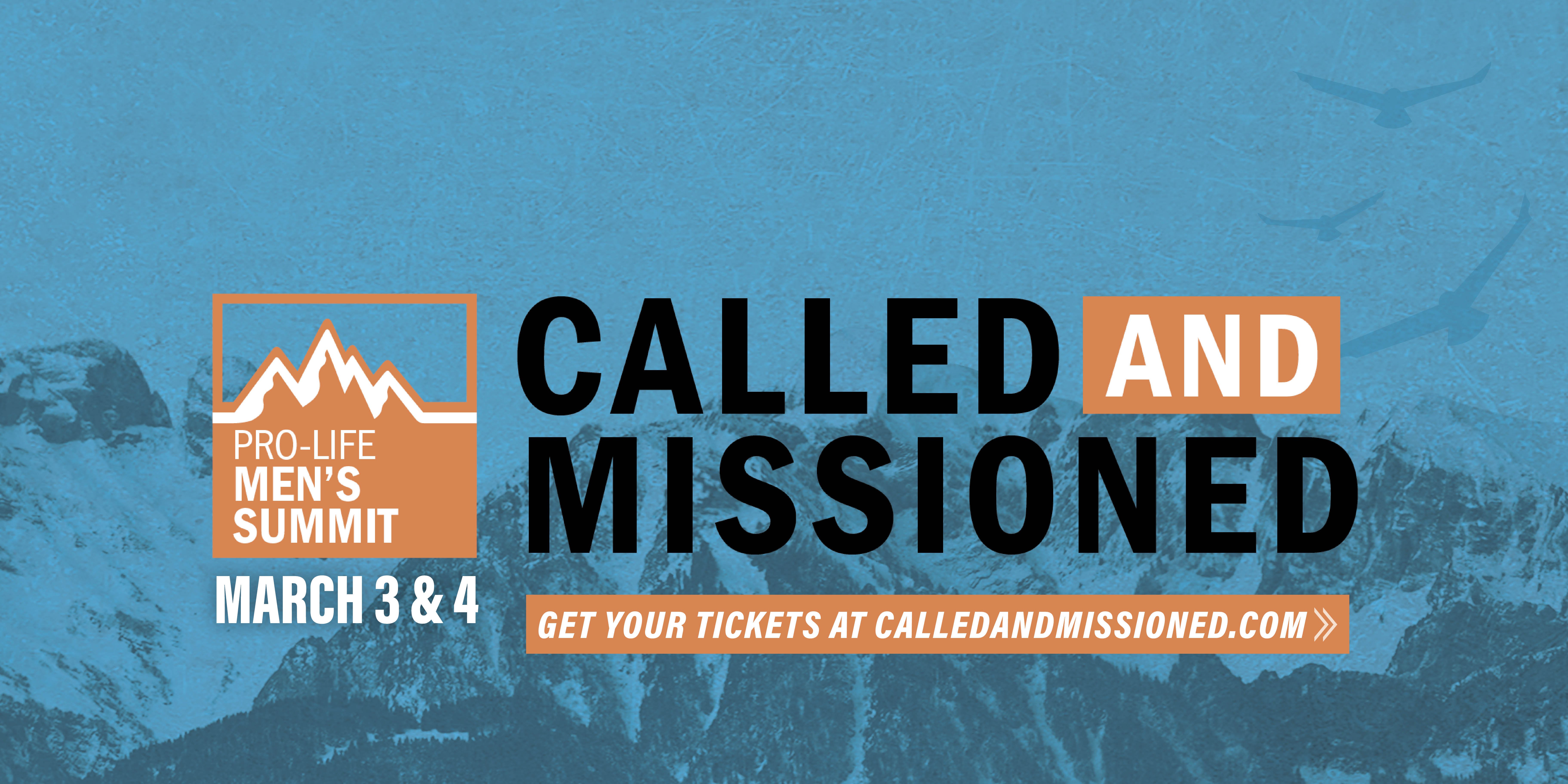 A Return on Investment: How the Care Net Men's Summit Was a Game Changer for My Center

Before I came on staff at Care Net, I was a pregnancy center Executive Director (ED), and a self-proclaimed "Care Net junkie." I became a "junkie" because, not long after coming on as an ED, I realized that anything Care Net produced was top-notch. Everything was done in a spirit of excellence, from the client resources for the pregnancy center to the training provided through the Centers of Excellence University.

That is why when I saw the promotions for the Pro-Life Men's Conference at the Care Net National Conference 2021, my initial thought was not, "Should I send men to this?" but rather, "Which men do I need to contact now to tell them to save the date?" I understood right away the importance of sending men to this event so that they could catch the vision of the Pro Abundant Life work being done in pregnancy centers and the need for it in our churches and communities.

Watch this short video to hear a few testimonies from the men I sent last year who benefitted from the Pro-Life Men's Conference, and read more below.

I am pretty sure I can guess your thoughts right now. "Is this just a men's version of the National Conference?" Then if so, "Do I have the budget to send people to more than one event this year?" I promise, I understand, I've been there. When I was a new ED, I thought I was doing the ministry a favor by not sending anyone to conferences or only sending one person to cut down on costs. Please learn from my mistake. Sending others to conferences - especially men to the Pro-Life Men's Summit - is an investment, not an expense!

Care Net's vision is for the Men's Summit to be a launching point for your ministry to serve men in your community more effectively. Since this event is geared specifically to men who are hungry to be involved in the abundant life movement, it can help them gain direction to be a greater blessing for your ministry. This event is not the "men's version" of the National Conference. The National Conference has pregnancy center-specific training that can be very valuable for your male team members; however, this event will inspire and equip men to learn how they can contribute to your mission and help you form greater partnerships with local churches and other ministries.

I can testify the truth of this, by sharing some testimonies of the impact I saw from sending men to the Pro-Life Men's Conference last year.

Not long after hearing about this event, I made the decision that our pregnancy center would invest in our ministry by sending a few men by paying for their registration, travel, and lodging. I sent our Fatherhood Director, Board President, Embrace Legacy Leader (a local pastor), and the Embrace Legacy Co-Leader. Let me tell you about the return on investment the pregnancy center experienced from sending these men by telling 3 of their stories.

Our Board President returned to the office excited and on fire for our mission! He told us all about what he learned. He told me, "The impact was seeing like-minded men together and moving the conversation forward. Now, men are encouraged to step out and up." He appreciated knowing more about our work within the pregnancy center. Who doesn't want their board to realize and appreciate their everyday work better? How would you love an engaged and on-fire Board President? Our Board President became so passionate that he even attended the Care Net Conference in Arizona to learn how to be a better board member. He has already told me he wants to attend the Pro-Life Men's Summit in March and the annual conference again next August for the board workshops! Although I am no longer the ED of this pregnancy center, the new ED has already approved that all men on the Board of Directors are invited to attend the Pro-Life Men's Summit in March on behalf of the pregnancy center! So, send your board!

One of our local pastors caught the vision of this work and had recently launched Embrace Legacy, a program to encourage fathers, in our community in partnership with the pregnancy center. Although he wasn't specifically a pregnancy center volunteer nor a staff member, I knew sending him would be an investment into eternity with the work he was already doing and a blessing to him. I cannot begin to describe the investment that our pregnancy center and the community experienced. This men's event gave him a new passion for our ministry, and I have to say it is very contagious. He told me, "I really enjoyed the conference because I felt like maybe the Church was finally turning a corner by including and reaching out to the men who have been impacted by unexpected pregnancies and/or abortions. For too long, the 'other part of the equation' has received little to no help in going through something like that. I guess they thought it didn't impact the men as much as it did the ladies. It was awesome to see the Church reaching out to these men and offering healing through the Lord Jesus Christ! The speakers were relevant, they offered hope, and encouragement to live the abundant life!" He is still leading Embrace Legacy, and the impact has been tremendous! Not only is his church now a monthly partner with the ministry, but he is steadfast in his support for the pregnancy center. He hosted a table at the recent banquet. When the center recently had a Pastor's Luncheon, he was among the first to sign-up. Wouldn't you love your local pastors to catch this vision, show up to every event to show their support, and help your clients in ways the pregnancy center can't? Send your local pastors who have a passion for this work!

Lastly, I wanted to invest in our Fatherhood Director by showing him how much I appreciated him and all the work that he does, by sending him to be refreshed in the company of other God-fearing men also working in the pro-life movement. In a ministry that is predominantly women, I think that it is important that men feel seen, heard, and have fellowship with other men in this ministry. So, after returning from the Men's Conference our Fatherhood DIrector contacted me to tell me how much this meant to him. He said, "I enjoyed meeting other men trying to strengthen their fatherhood program at pregnancy centers. It was humbling and an honor to share some of the great things God has been doing through our fatherhood program at the pregnancy center. I had attended conferences in the past, but none of them were very focused on developing a men's program like this one. I have shared so much of what I have learned with our fatherhood volunteers, and now we have two more men joining our fatherhood volunteer team! Attending this conference was a God thing, and I am indebted for the opportunity I had to attend." The fatherhood program has new life and is now growing at the pregnancy center. Do you want to see your fatherhood program grow? Send your Fatherhood Director and volunteers!

When the Board of Directors were preparing the fiscal budget in June, they noticed that we had spent a little more than planned in the category of conferences/professional development. However, because of the fruit they had seen from sending staff, volunteers, and board members to these events, they said, "It looks like we need to increase this category for the next year!" If the cost is a hurdle for you, I would encourage you to ask your supporters if they would support sending men to the Pro-Life Men's Summit to invest in the men in the community. I know from experience that there are donors that love to invest in the Fatherhood programs.

To show how much we here at Care Net HQ believe that men should be able to attend both the Men's Summit and our National Conference, I am thrilled to tell you that we are offering $99 off the Care Net Conference registration for the men that register for the Pro-Life Men's Summit! As an Executive Director, I would think that would be the green light to "add to cart"! I hope that this testimony encourages you to send men this March. It's not just an investment into the pregnancy center but an investment into eternity as they return and do the work God has called them to do!

Register now for the Men's Summit under Early Bird pricing for just $99 per attendee! This important event will be held March 3 - 4, 2023 at Oak Cliff Bible Fellowship in Dallas, TX.