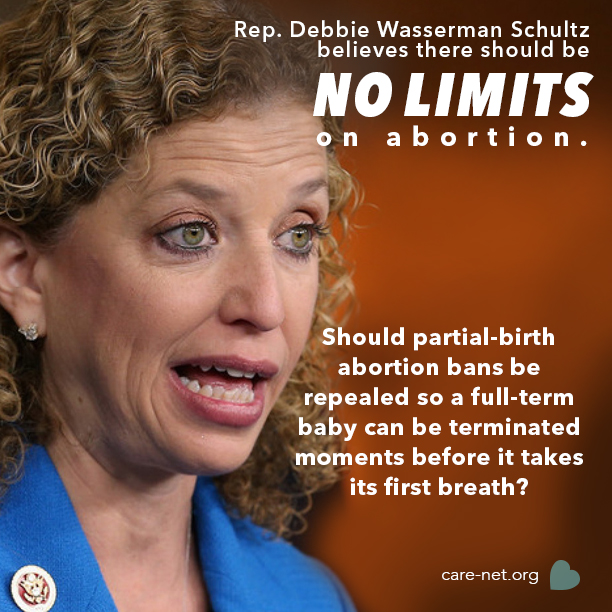 In the ongoing tustle over abortion between Sen. Rand Paul and Rep. Debbie Wasserman Schultz, Rep. Schultz has doubled down on the belief that there should be no limits on abortion.

What is even more striking is that Rep. Schultz, as Chair of the Democratic National Committee, has made it clear that this is the position of her party. They have put a stake in the ground on an extreme, hard-to-defend position that is out of line with the country and the world.

Morevoer, there are some very practical, and scary, implications to Rep. Schultz' position. Because she believes that there should be no limits on abortion, that would mean that several current laws would have to be overturned to accomodate her position. For example...

Does Rep. Schultz believe that parental notification laws should be removed, and an 11-year-old girl should be able to get an abortion without her parents' knowledge?

Does Rep. Schultz oppose health safety standards for abortion clinics, which ensure that the women who use the clinics have a sanitary and safe experience?

Does Rep. Schultz oppose the partial birth abortion ban passed by Congress, and therefore supports the termination of full-term babies as they are being delivered?

There are also several limits on abortion being debated. Does she oppose these, too? For example...

Does Rep. Schultz believe that babies who feel pain should be terminated, and therefore opposes the Pain Capable Unborn Protection Act?

Does Rep. Schultz support the brutal practice of dismembering a fetus, and therefore opposes bans on dismemberment abortion?

These are all common sense measures to govern the process of procuring an abortion in this country. Unwavering opposition regardless of the circumstances hardly seems like a voice of reason that is needed in this debate.

Rep. Schultz was recently interviewed on CNN, where she "explained" her extreme view. You can watch the entire interview below.