Is Planned Parenthood being presented in a False Light? 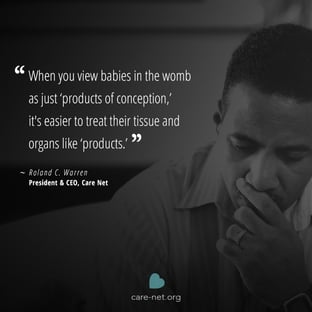 Recently, I had a rather illuminating conversation with my attorney while reviewing a contract for a TV show appearance.  The contract stated that I could not be portrayed in a “false light.”  Since I was unfamiliar with this term, I asked her to explain it.

As is her gift, she gave me an excellent example devoid of legalese.  Specifically, she told me about the case of an actress whose contract for a film stated that she would not do any nude scenes. This restriction frustrated the film’s director. So, when the actress did a scene while wearing a bikini, the director instructed the film’s editors to black out the actress’ bikini top and bottom, which, of course, made it appear as if she were nude.  Therefore, this actress was presented in a false light.

Thankfully, I was not at risk for anything like this.  But, it was good to know that I was “covered” just in case. That said, I found what she told me very interesting and ironic. You see, to present someone or something in a false light is to show what is there in a way to give the impression of what is not there.  In fact, false light seeks to reveal a truth that a deceiver wants to promote, by concealing the truth.

Now, this brought to mind the passage in scripture where we are warned to watch out for Satan because he can appear as an “angel of light.” Or, better yet, an angel of false light.  Of course, Satan’s desire from the Garden of Eden has been to deceive mankind about what is true about God’s nature and character, as well as our design and why we were created.  Alas, Satan is more skilled than the most clever film editor in using false light to show and illuminate what is not true.  And, unfortunately, too many are led astray.

Well, this concept of false light is especially relevant now as we consider the content in the videos that the Center of Medical Progress has released regarding Planned Parenthood’s grisly practices with aborted fetal tissue and organs.  Indeed, Planned Parenthood is essentially saying that they are being presented in a false light.  But, when you watch the videos—the edited or the full versions—it’s clear that this is not the case.

Ironically, for years, with the aid of powerful folks in politics and in the media, Planned Parenthood has presented itself in a false light.  They have skillfully edited out from the public’s view the true nature of their work.  You see, when you refer to unborn babies as just “products of conception,” it becomes easy to view their tissue and organs as products to be sold to the highest bidder.  Doesn’t it?

But, fortunately, there is a “true” light that beckons us to follow.  It’s the kind of light that is reflected from an eternal lighthouse, which warn us of the rocky and real dangers to our minds, bodies, and souls that loom ahead and below when we believe and embrace what is false.  Indeed, Psalm 119:105 reminds and assures us that God’s Word is a lamp for our feet and a light—a true light—on even the darkest path.  So, let us pray daily that the people at Planned Parenthood and those who support the notion that it is good to kill and sell the unborn find this abiding light.